THE TACOMA FLATS A study of post-industrial urban waterfront rejuvenation 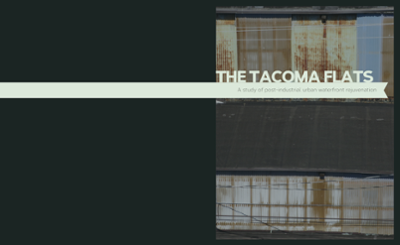 Copyright © is held by the author. Digital access to this material is made possible by the College of Architecture, Planning, and Landscape Architecture, and the University Libraries, University of Arizona. Further transmission, reproduction or presentation (such as public display or performance) of protected items is prohibited except with permission of the author or the department.

This item is part of the College of Architecture, Planning, and Landscape Architecture Master's Theses and Reports collections. For more information about items in this collection, please contact the UA Campus Repository at repository@u.library.arizona.edu.

Named after nearby Mount Rainier, Tacoma has been on a slow but steady rebound from the economic decline of a postindustrial nation. Founded at the terminus of the Northern Pacific Railroad in 1873, Tacoma’s economy was historically based largely on the exportation of natural resources, such as timber and coal. Although still trying to find its stride, this Pacific Northwest city has retained, for the most part, the blue collar industrial grit that the city was originally founded on. Like most industrial cities, Tacoma suffered a prolonged decline in the mid-20th century. An effect of suburbanization and disinvestment, the city still finds many of its historic structures and vacant parcels largely underutilized. However, since the 1990’s, the city has felt some effects of reinvestment. The University of Washington integrated a Tacoma campus into the Downtown core, Tacoma Link, the state’s first light rail line, and the Thea Foss Waterway urban waterfront redevelopment all helped to provide the local economy with a much needed boost. Additional investments in the downtown include the restoration of Union Station and the creation of the Museum District, which includes The Museum of Glass, Bridge of Glass, Tacoma Art Museum, Washington State History Museum, Lemay-America’s Car Museum, Children’s Museum of Tacoma, and Foss Waterway Seaport - a centuryold shipping warehouse and maritime heritage educational center. Tacoma also posses a thriving theatre district. Perhaps we have disinvestment to thank for the lack of redevelopment that has ultimately lead to the preservation of vast blocks of historic Tacoma. This fact, along with a more affordable housing market, and greater investment interest help lay the foundation for a future as a complete and healthy metropolitan center. This city inherently holds many of the desirable amenities, spatial arrangements, and historical vernacular that other cities around the country are trying to recreate post urban renewal era. The Tacoma Flats programming and design makes many assumptions regarding the future of this city - a fully realized economy, a large regional population expansion, and increased efficiencies in port functions. This 2050 vision is just that, a glimpse of how underutilized former industrial areas adjacent to the downtown core could be used to accommodate the growth, health, and ecological function of this historically rich region of the Puget Sound. The Tacoma Flats 2050 vision is simply the realization of possibilities.