On The Chemical Nature of Aerosol, Clouds, and Precipitation along the US West Coast 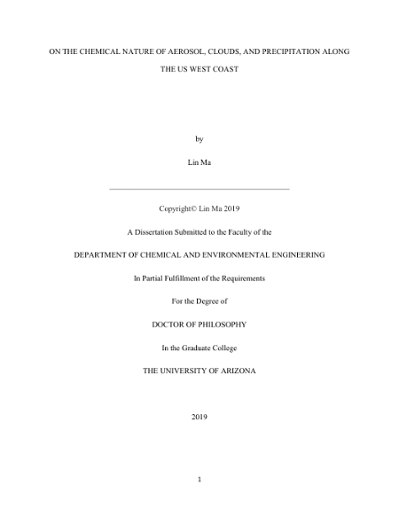 Particulate matter (PM) in ambient air affects visibility, climate, human health, and the hydrological cycle. The water-soluble fraction of PM is relevant to nucleation efficiency, atmospheric residence time and hygroscopicity. In regions such as coastal California (United States) and Metro Manila (Philippines), pollution comes from variety of sources. By analyzing water-soluble element data collected in Marina, California from two separate summertime field campaigns: the Nucleation in California Experiment (NiCE) in 2013 and the Fog and Stratocumulus Evolution (FASE) campaign in 2016, six characteristic sources were found: Marine Emissions (45.4% of total mass), Secondary Aerosol (24.4%), Biomass Burning (13.1%), Waste Facilities (8.7%), Vehicular Emissions (4.4%) and Crustal Emissions (3.9%). Temporally-resolved results showed higher PM levels associated with Vehicular Emissions (day/night mass concentration ratio = 31.3) in Marina, California. Similar source apportionment analysis was conducted using data collected in Metro Manila, Philippines through a year-long sampling campaign (the Cloud, Aerosol, and Monsoon Processes Philippines Experiment (CAMP2Ex) weatHEr and CompoSition Monitoring (CHECSM) study) established in July 2018. It was observed that black carbon contributed a large fraction of PM in Metro Manila, exceeding what is found in most all other global regions. Positive Matrix Factorization (PMF) results revealed that the highest contribution to the study region was Aged/Transported pollution (48.0% of total mass) and followed by Sea Salt (22.5%), Combustion (18.7%), Vehicular/Resuspended Dust (5.6%) and Waste Processing (5.1%). In Metro Manila, secondarily produced inorganic species exhibited peaks in the submicrometer range (0.32–0.56 µm) while ions associated with primary emissions had peaks in the supermicrometer range (1.8–5.6 µm). Most of the water-soluble elements exhibited bimodal behavior, with peaks in the submicrometer and supermicrometer range. Pinnacles National Monument, ~65 km east of the coastline of California, is one of the few monitoring sites along the US western coast where aerosol and precipitation data are both available. At that site, seven pollution sources were identified by PMF: aged sea salt (25.7% of PM2.5), biomass burning (24.2% of PM2.5), fresh sea salt (8.2% of PM2.5), secondary sulfate (11.7% of PM2.5), dust (10.0% of PM2.5), vehicular emissions (8.2% of PM2.5) and secondary nitrate (5.2% of PM2.5). Examining co-located aerosol and precipitation data provided insights into aerosol and precipitation interactions. Results revealed that the reduction of pH in precipitation is likely due to uptake of HNO3 instead of acidic aerosols such as secondary sulfate and aged sea salt partitioning to rain drops. The positive correlation between Ca2+ in precipitation and two aerosol source factors (dust and aged sea salt) and PMCoarse indicated that coarse particles promoted precipitation to some extent. The finding that sulfate was highly corelated with dust and aged sea salt source factors, suggested that secondary sulfate partitions to dust and sea salt particles. Arid and semi-arid region such as Tucson, Arizona are experiencing water shortages, which promotes the development of advanced technologies that can improve process performance in water reclamation. UV/H2O2 advanced oxidation processes (AOPs) have been mostly used in destruction of organic compounds in tertiary wastewater treatment. The transformation mechanism of organic compound UV/H2O2 AOPs involves reaction with hydroxyl radical that is difficult to measure using analytical techniques. Existing models that have been developed to quantify and monitor the attenuation of organic compounds did not consider the scavenging effect between hydroxyl radical and reaction intermediates. In this study, a complete kinetic model was developed to understand the full reaction mechanism of p-cresol in UV/H2O2 AOPs. Such a model can be employed to predict concentrations of target compound and intermediates. Centrate is a supernatant of products produced in anaerobic digesters. Struvite is a relatively insoluble mineral that has been identified in sludge and anaerobic digestor associated pipelines. The formation of struvite clogs pipes and coats pumps and can significantly reduce process performance. Because the solubility of struvite is higher in low pH solution, carbon dioxide from an anaerobic digester was used to reduce pH of centrate for prevention of struvite formation. Bench experiments were conducted to validate an equilibrium model that was used to predict the steady state pH of centrate at the point of injection of carbon dioxide under atmospheric and elevated pressures. The equilibrium model was also used to determine pH, where struvite formation occurs. A pilot plant was constructed to investigate alternative operation modes. Results showed that mixing carbon dioxide pre-saturated centrate with a fresh centrate stream can reduce centrate pH to levels necessary to prevent struvite formation and is more effective than injection of gaseous carbon dioxide. This study provides a design protocol for wastewater treatment plants that experience struvite issues to implement proposed technologies for preventing struvite formation.