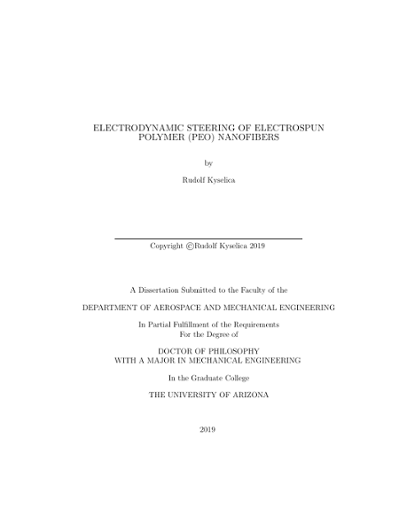 Polymer nanofibers and structures composed of these nanofibers, with their set of physical parameters and material properties are favorable for various biomedical applications. Examples of these are scaffolds for artificial tissue engineering, stents production, or a localized and dosage-controlled medication administration. Because of this, interest in these polymer structures has been increasing significantly over the past decades. To align with the specific set of requirements for different applications, stiffness, porosity, conductivity, biodegradability and other parameters of such structures need to be controlled by adjustment of the nanofiber diameter, fiber`s organization and used material. Electrospinning proved itself to be very versatile and inexpensive fiber extrusion technique, capable of nanometer-sized fibers production. For these reasons, electrospinning became the most widely used continuous nanofiber production technique. Since it was developed (early in the 20th century), it has been extensively researched and optimized, especially in terms of the instrument design and in the ability to spin wide variety of polymers. However, the electrospinning process parameters, with their significant impact on the extruded fiber are not yet fully understood. Especially if in combination with different fiber collection techniques. These techniques are designed to achieve a desired fiber alignment or woven fibers. Most commonly used collection technique for aligned fiber collection is a dynamic collector electrode. This work discusses extrusion, deposition, modeling and applications of aligned electrospun polyethylene-oxide nanofibers. Capability of multiple-axis electrostatic focusing and electrodynamic fiber steering is investigated in a series of experiments, where static electrode was used. Identified minimum required axial component of the electric field of E_z=1.6×10^6 [V/m], needed for fiber extrusion, introduces limitation on electric potential applied to the auxiliary electrodes of the electrospinning device. Consequently, minimum steady-state circular fiber deposit area achieved with implementation of such focusing was found to be A=40 mm2 (for 5% PEO in DiH2O). Electrodynamic fiber steering, as opposed to the electrostatic focusing, allows to actively steer the fiber into various fiber deposits, dependent of the electric field distribution created inside the device by a set of auxiliary electrodes. The size of the deposit is defined by the frequency of the steering. With linear(1D) fiber steering, sharp line deposit composed of parallel fibers was achieved, with length of the deposit as a function of forcing frequency L_1D=4.832 f^(-1.43) [m] on interval f= [40 200] Hz. Addition of another set of electrodes in plane perpendicular to the first one, allowed for expansion of the line deposit to almost circular. Length of the semi-major axis of the elliptical deposit now follows the function of L_2D=1.45 f^(-1.332) [m] on the same frequency interval. Fiber still undergoes mechanical buckling upon contact with the static collector electrode. Capability of the developed electrodynamic steering method to deposit parallel fibers is demonstrated on preparation of two different fibrous structures for biomedical application. Both of these structures were prepared with application of 1D electrodynamic steering in combination with slowly rotating collector rod. First is a tubular structure, composed of axially deposited fibers, deposited on a latex substrate, and allowing for its radial inflation without fiber damage. Such structure could be then used as coronary drug-eluting stent. SEM imaging of inflated tube, however, suggest certain fiber loss, possibly due to fiber rupture. Second structure is a solid cylinder, with no underlying substrate and composed of highly oriented and straight fibers. Such structure than could be used as a nerve graft for nerve regeneration. SEM imaging of produced cylindrical structure of 1.5 mm in diameter show very high level of fiber alignment and straightness. Alongside, the experimental work, two mathematical models of fiber (one assuming solid fiber – Kelvin-Voigt material model, second assuming viscoelastic fiber material – Maxwell material model) extrusion and deposition are built and evaluated by comparison to experimental results. This way, capability of individual models to predict fiber behavior under various settings of the electrospinning device with electrodynamic fiber steering was examined. To better match the simulation and experimental results, Stokes drag coefficient had to be increased in both models (720 times in Kelvin-Voigt model and 40 times in Maxwell model), to reduce the lateral movement of the fiber. A need for such increase of the air friction coefficient is presumably caused by bending stiffness and bending friction not being implemented into neither of the two models. Then the excessive lateral movement of the fiber is corrected by this increase of air friction. High sensitivity of both models to changes of this friction coefficient suggests that the air drag, even if small, cannot be neglected, as other researchers previously reported.