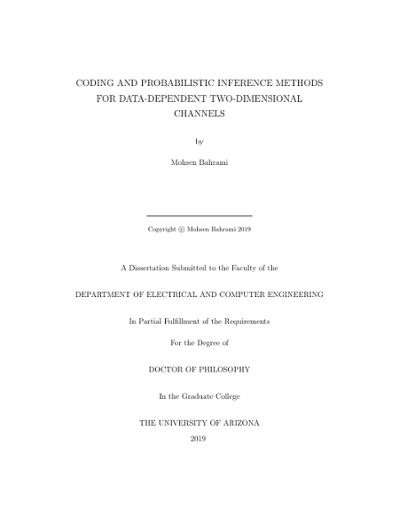 Recent advances in magnetic recording systems, optical recording devices and flash memory drives necessitate to study two-dimensional (2-D) coding techniques for reliable storage/retrieval of information. Most channels in such systems introduce errors in messages in response to certain data patterns, and messages containing these patterns are more prone to errors than others. For example, in a single-level cell flash memory channel, inter-cell interference (ICI) is at its maximum when 101 patterns are programmed over adjacent cells in either horizontal or vertical directions. As another example, in two-dimensional magnetic recording channels, 2-D isolated-bits patterns are shown empirically to be the dominant error event, and during the read-back process inter-symbol interference (ISI) and inter-track interference (ITI) arise when these patterns are recorded over the magnetic medium. Shannon in his seminal work, ``A Mathematical Theory of Communications," presented two techniques for reliable transmission of messages over noisy channels, namely error correction coding and constrained coding. In the first method, messages are protected via an error correction code (ECC) from random errors which are independent of input data. The theory of ECCs is well studied, and efficient code construction methods are developed for simple binary channels, additive white Gaussian noise (AWGN) channels and partial response channels. On the other hand, constrained coding reduces the likelihood of corruption by removing problematic patterns before transmission over data-dependent channels. Prominent examples of constraints include a family of binary one-dimensional (1-D) and 2-D $\left(d,k\right)$-run-length-limited (RLL) constraints which improves resilience to ISI timing recovery and synchronization for bandwidth limited partial response channels, where d and k represent the minimum and maximum number of admissible zeros between two successive ones in any direction of array. In principle, the ultimate coding approach for such data-dependent channels is to design a set of sufficiently distinct error correction codewords that also satisfy channel constraints. Designing channel codewords satisfying both ECC and channel constraints is important as it would achieve the channel capacity. However, in practice this is difficult, and we rely on sub-optimal methods such as forward concatenation method (standard concatenation), reverse concatenation method (modified concatenation), and combinations of these approaches. In this dissertation, we focus on the problem of reliable transmission of binary messages over data-dependent 2-D communication channels. Our work is concerned with several challenges in regard to the transmission of binary messages over data-dependent 2-D channels. Design of Two-Dimensional Magnetic Recording (TDMR) Detector and Decoder: TDMR achieves high areal densities by reducing the size of a bit comparable to the size of the magnetic grains resulting in 2-D ISI and very high media noise. Therefore, it is critical to handle the media noise along with the 2-D ISI detection. In this work, we tune the Generalized Belief Propagation (GBP) algorithm to handle the media noise seen in TDMR. We also provide an intuition into the nature of hard decisions provided by the GBP algorithm. Investigation into Harmful Patterns for TDMR channels: This work investigates into the Voronoi based media model to study the harmful patterns over multi-track shingled recording systems. Through realistic quasi micromagnetic simulations studies, we identify 2-D data patterns that contribute to high media noise. We look into the generic Voronoi model and present our analysis on multi-track detection with constrained coded data. We show that 2-D constraints imposed on input patterns result in an order of magnitude improvement in the bit error rate for TDMR systems. Understanding of Constraint Gain for TDMR Channels: We study performance gains of constrained codes in TDMR channels using the notion of constraint gain. We consider Voronoi based TDMR channels with realistic grain, bit, track and magnetic-head dimensions. Specifically, we investigate the constraint gain for 2-D no-isolated-bits constraint over Voronoi based TDMR channels. We focus on schemes that employ the GBP algorithm for obtaining information rate estimates for TDMR channels. Design of Novel Constrained Coding Methods: In this work, we present a deliberate bit flipping (DBF) coding scheme for binary 2-D channels, where specific patterns in channel inputs are the significant cause of errors. The idea is to eliminate a constrained encoder and, instead, embed a constraint into an error correction codeword that is arranged into a 2-D array by deliberately flipping the bits that violate the constraint. The DBF method relies on the error correction capability of the code being used so that it should be able to correct both deliberate errors and channel errors. Therefore, it is crucial to flip minimum number of bits in order not to overburden the error correction decoder. We devise a constrained combinatorial formulation for minimizing the number of flipped bits for a given set of harmful patterns. The GBP algorithm is used to find an approximate solution for the problem. Devising Reduced Complexity Probabilistic Inference Methods: We propose a reduced complexity GBP that propagates messages in Log-Likelihood Ratio (LLR) domain. The key novelties of the proposed LLR-GBP are: (i) reduced fixed point precision for messages instead of computational complex floating point format, (ii) operations performed in logarithm domain, thus eliminating the need for multiplications and divisions, (iii) usage of message ratios that leads to simple hard decision mechanisms.