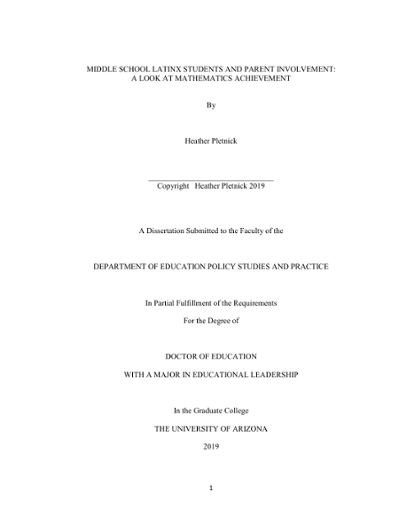 Regardless of the racial or ethnic background of the parents, there are positive benefits of parental involvement on students’ academic outcomes. Involving parents from varying backgrounds across all grade levels is a challenge for K-12 educators. Some of the barriers that exist for consistent parent involvement, especially with minority students, are life context, class, gender, student learning difficulties, differing agendas, language barriers, and societal, historical and economic changes. The educational model in the United States was originally developed for majority middle-class families and their children, rather than for minority parents and their children. Currently, the demographics of our schools are shifting. It is estimated that 1 of every 4 students, including 40% of the total school population in nine states, is Latinx. Despite this growth, Latinx students are still underperforming academically when compared to their white and Asian classmates, especially in math. A literature review shows that there is a dearth of parent involvement literature at the secondary level, especially when minority students are concerned. Recent parent involvement literature focuses on the shift of how parent involvement is both defined and implemented. The emphasis has shifted from how parents are involved at school to what they are doing in the home. More specifically, recent literature focuses on subtle forms of parent involvement like setting high expectations, continual open communication, and creating a stimulating environment (Jeynes 2010). This qualitative case study sought to answer three research questions: 1) How do middle school administrators encourage and support home-based Latinx parent involvement in advanced mathematics? 2) How do middle school math teachers encourage and support home-based Latinx parent involvement in advanced mathematics? 3) How do Latinx family members facilitate support for advanced mathematics? The study was conducted at a middle school in a suburban area of a southwestern state in the United States with approximately 800 students (approximately 45% minority) in grades 7th and 8th. Data were gathered from multiple sources, including face-to-face interviews, online and paper documents, and email communications. Findings revealed that the proportion of Latinx students in advanced math (8%) is not the same as the proportion of Latinx students (approximately 40%) in this predominately middle-class school. Findings also revealed that the parents nominated by math teachers for this study were mostly assimilated, middle-class educated parents. From the interviews, one strong theme that emerged were that administrators, teachers, and parents collectively are setting high expectations both at school and in the home for each other. A second theme is that there exist open communication styles in the home, and responsive communication at school, that included a weekly general email to parents from administration. Teachers communicated less frequently with parents but did so on an as needed basis when curriculum or student behavior warranted it. Finally, a third theme revealed that administrators, teachers, and parents created an environment conducive to learning and collaboration in a very traditional sense without regard to the parent involvement or Latinx literature. Some unexpected findings came out of the study. There is colorblindness at every level of the district. All participants refer to students in general terms, void of any ethnic considerations. In addition, when teacher participants were prompted for involved Latinx parents, two involved white parents were identified. Finally, the only Latinx administrator in the district (A2), had not heard of the term Latinx. The other unexpected finding was that the district and the school had plans to improve math but have ignored the research of family involvement and engaging Latinx students. This study is supported by the math work of Sheldon & Epstein (2005) that focuses on the need for stronger curriculum and instruction as well as student readiness and background. It is partially supported by student attitudes about math and support for math in home environments. In addition, this study is supported by the parent involvement literature of Jeynes that focuses on the subtle types of parent involvement such as setting high expectations, open communication, and providing an environment in the home that is conducive to learning (2010). Although all parents report subtle at home activities that mirrored findings by both Sheldon & Epstein (2005) and Jeynes (2010), finding must be considered in light of the fact that all were assimilated, middle-class educated parents. One practice recommendation includes teaching parents about subtle parent involvement strategies like open communication and setting high expectations. This can be done in the form of written or oral communication at the beginning of the school year or by offering parent classes throughout the school year. Another practice recommendation includes training teachers as well on how to engage with parents about the subtle forms of parent involvement. This can be done in college teacher preparation classes or during summer professional development or site administration modeling of how to frame conversations and communicate with parents via their syllabus or in person at back to school night for parents. Finally, it will be necessary to develop a parent curriculum. This curriculum would not only support parents and their navigation of the school system, but also for administrators and teachers and how they can best communicate and involve the parents in their child’s education. Further, tangible math lessons that go home for parents and their children to work out together should be created. Two additional studies may add to the literature base. A study of non-middle-class parents. The first study will provide an opportunity to look at their non-middle-class parenting and communication styles and how they navigate the school system. It can focus on how educators provide parents with opportunities to stay more connected to school and eventually increase the number of Latinx students in advanced math classes. Second, a study to identify students at an earlier age before math placements are determined to increase the number of Latinx students in advanced math classes. By supporting subtle parent involvement in elementary school, parents can support math development, develop relationships with educators, and encourage participation in advanced level math classes.