Biodistance Evidence for Migration and Gene Flow in the North American Southwest, 2100 BC AD 1700 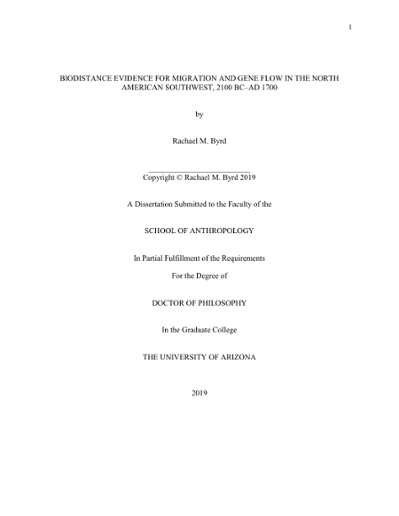 The research presented in this dissertation develops a multi-scalar approach to reconstructing population histories from phenotypic variation in cranial morphology across the North American Southwest over time. One of the prime contributors to phenotypic variation in the region was migration. When considering the frequency of events and distances humans migrate, Native groups in the North American Southwest show considerable diversity in their trajectories. Archaeological evidence identifies substantial variation in locally-based and long-distance migration across the region prior to AD 1696. A great deal of research has focused on delineating the dimensions of migration to understand their impact on local and migrant communities; however, migration as a process involves both social and biological factors that require a heavily integrated approach to understand their effects on past populations. Therefore, it is important to identify the biological consequences (signatures) of population interactions to properly test archaeological models of migration. In this dissertation, I take a population history approach at several scales to explore phenotypic variation in cranial morphology representing 3,800 years of occupation in the Southwest. I apply biological distance (biodistance) methods in a series of three analyses to reconstruct population histories, test archaeological migration inferences, and develop a framework for applied bioarchaeology in the region. The first study focuses on finer phenotypic variation, using three-dimensional measurements from the temporal bone, to test the proposed direct migration of people from the Kayenta region to pueblos and compounds south of the Mogollon Rim, and identify if co-residence of migrants within local communities led to gene flow and admixture. Samples included in this study consist of 204 individuals from the Kayenta region and several large Mogollon region pueblos (Turkey Creek, Point of Pines, and Grasshopper). Results demonstrate that the pre-migration Kayenta population is closely related to individuals from the earliest Point of Pines Pueblo site. Canonical Variates Analyses (CVA), both including and excluding migrants (identified through burial position, cranial modification, and isotope analyses), show minimal change in variation indicating that extensive gene flow occurred alongside co-residence. The second study incorporates an extensive (temporally and geographically) craniometric database for the region to test for biological traces of four archaeologically-based migration processes: 1) colonization of open landscapes, 2) internal frontiers, 3) diaspora, and 3) coalescence and reorganization (following Mills 2011). Relethford-Blangero analyses, calculated using facial measurements from 1,299 crania representing 28 geographically and temporally defined sub-regions, provide support that biological signatures (morphological affiliation and variation) follow these migration processes in the region. The cumulative impacts of migration ultimately transformed, and had lasting effects on population structure and social organization across the North American Southwest. A significant amount of heterogeneity characterized how groups were structured and, along with biological affiliation, distinctive migration patterns are reflected in group variance. The third and final study aims to develop a customized reference database—the Arizona Biological Affiliation Database (or AzBAD)—to aid in the integration of biological evidence into cultural affiliation or cultural affinity determinations pursuant to the Native American Graves Protection and Repatriation Act (NAGPRA) and Arizona state repatriation statutes. AzBAD also incorporates the extensive craniometric database developed through the second study but employs the commonly used forensic classification software Fordisc 3.1. This tool is then tested using a case study, the remains of an archaeological individual (including a cranium) with limited contextual information, against the reference database. The resulting estimated biological affiliation highlights the importance of understanding local population histories of reference groups within the database to appropriately interpret biological affiliation for engaging and consulting with descendent communities. Overall, the results of these studies clarify how evidence from cranial morphology and phenotypic variation can be aligned with archaeological inferences to formulate a more comprehensive understanding of migration as multiple interrelated processes with predictable biological outcomes. This research has archaeological implications as it directly tests migration inferences made from archaeological materials with biological evidence. In addition, tools such as AzBAD can contribute to the incorporation of biological evidence into consultations with descendant communities regarding ancestral human remains, and support bridging approaches to understanding the biocultural impact of population histories through time.