Households, Ritual, and the Origins of Social Complexity: Excavations at the Karinel Group, Ceibal, Guatemala 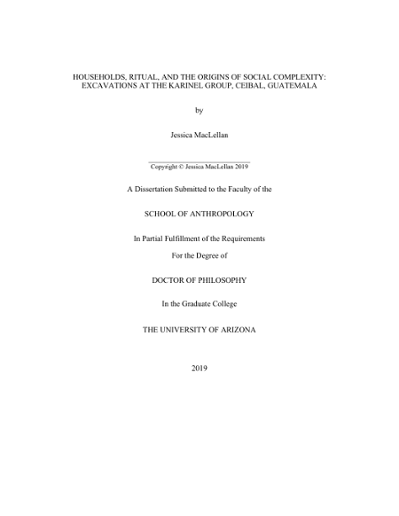 In this dissertation, I investigate the role of household ritual in the development of complex society at the Maya site of Ceibal, in Guatemala. My approach to ritual – and its role in both uniting communities and fostering hierarchies – is grounded in practice theory, particularly the work of Catherine Bell. Ceibal was the ideal location at which to explore the relationship between domestic and public ritual during the development of Maya civilization, because the site was founded as a ceremonial center around the transition to sedentism and intensive agriculture. My dissertation research consisted of four seasons of extensive excavations at the Karinel Group, an early residential area at Ceibal, along with laboratory analyses in Guatemala City and bibliographic research into other early Maya sites. The Karinel Group was selected based on the presence of early ceramics, proximity to the site center, and relatively shallow overburden. It was important to develop a precise chronology of the Karinel Group, in order to learn 1) when people began to live in permanent patio groups, occupied over generations; 2) when household rituals and public plaza rituals were similar, and when they differed; and 3) when ancestor veneration rituals, as documented in northern Belize, began to play a role in the development of social inequality. The chronology was based on careful analyses of stratigraphy, ceramics, and radiocarbon dates. I found that while the Karinel Group was occupied around 850-775 BC, the earliest permanent structures date to after 775 BC and the earliest patio group dates to after 700 BC. These results support other research at Ceibal that indicates the transition from a more mobile lifestyle to a more sedentary one was gradual and piecemeal. I also found that domestic and public rituals at Ceibal had little in common until about 350 BC. Contrary to a common assumption, public rituals do not necessarily develop out of domestic predecessors. At Ceibal, separate household rituals centered on low circular platforms and involving ceramic figurines may have existed in tension with increasingly hierarchical rituals involving greenstone axe caches and restricted platforms in the public plaza. Interestingly, early ancestor veneration rituals seen in northern Belize were absent at Ceibal and in reports from other parts of the Maya lowlands, suggesting that the social processes that shaped early Maya society differed across regions. Around 350 BC, a major shift occurred across the lowlands, when household rituals became more centralized and similar to public rituals. This transformation in ritual practices requires further investigation, but it may have paved the way for the emergence of rulers.