Women in Israelite Religion: The State of Research Is All New Research 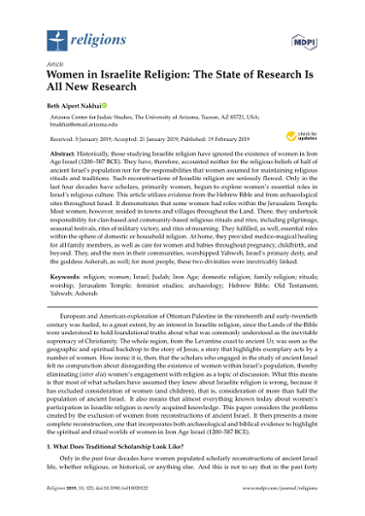 © 2019 by the author. Licensee MDPI, Basel, Switzerland. This article is an open access article distributed under the terms and conditions of the Creative Commons Attribution (CC BY) license.

Historically, those studying Israelite religion have ignored the existence of women in Iron Age Israel (1200-587 BCE). They have, therefore, accounted neither for the religious beliefs of half of ancient Israel's population nor for the responsibilities that women assumed for maintaining religious rituals and traditions. Such reconstructions of Israelite religion are seriously flawed. Only in the last four decades have scholars, primarily women, begun to explore women's essential roles in Israel's religious culture. This article utilizes evidence from the Hebrew Bible and from archaeological sites throughout Israel. It demonstrates that some women had roles within the Jerusalem Temple. Most women, however, resided in towns and villages throughout the Land. There, they undertook responsibility for clan-based and community-based religious rituals and rites, including pilgrimage, seasonal festivals, rites of military victory, and rites of mourning. They fulfilled, as well, essential roles within the sphere of domestic or household religion. At home, they provided medico-magical healing for all family members, as well as care for women and babies throughout pregnancy, childbirth, and beyond. They, and the men in their communities, worshipped Yahweh, Israel's primary deity, and the goddess Asherah, as well; for most people, these two divinities were inextricably linked.

Except where otherwise noted, this item's license is described as © 2019 by the author. Licensee MDPI, Basel, Switzerland. This article is an open access article distributed under the terms and conditions of the Creative Commons Attribution (CC BY) license.