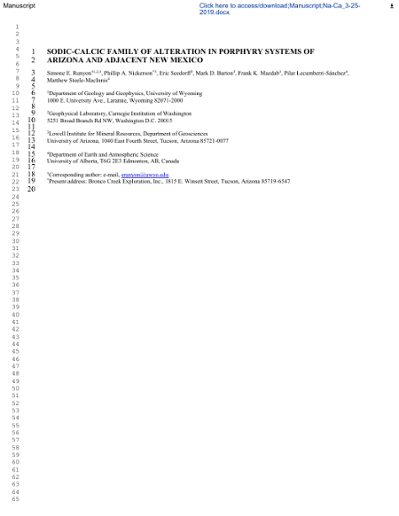 Sodic-calcic alteration has affected numerous districts with Laramide porphyry systems across Arizona and New Mexico. Previously undocumented Na-Ca alteration has been identified at Charleston, Sycamore Canyon, Silver Bell, and the Ninetysix Hills in Arizona and the Central mining district in New Mexico. These new occurrences are compared to sodic-calcic alteration at the Sierrita-Esperanza deposit (Pima district), the Ajo mining district, the Tea Cup pluton (Kelvin-Riverside district), and the Eagle Pass dike swarm in Arizona. Spatial positions, crosscutting relationships, and mineral assemblages and compositions allow for interpretation of the geochemical conditions of formation and implications for associated hydrothermal processes. Diopside- or andradite-grossular solid solution (Ad(68)-Ad(72))-stable assemblages representative of calcic alteration typically occur in deep and/or distal positions but are less commonly exposed. The sodic-calcic and sodic alteration types, however, occur more proximally to the porphyry orebody. Sodic-calcic assemblages containing Na plagioclase (An(10)-An(33))-Ca amphibole +/- epidote are focused along granite cupolas near the base of orebodies, and these grade into shallower sodic assemblages containing albite (An(00)-An(09))-epidote-chlorite. Mineral composition and fluid inclusion data suggest that Na-Ca plagioclase-bearing assemblages form at higher temperatures (360 degrees-470 degrees C+) than later, lower-temperature albite-epidote assemblages (>250 degrees C). Calculated delta D isotope compositions of fluids in equilibrium with Na-Ca alteration minerals span a broad range (-46 to -1%) and are consistently less negative than magmatic fluids. Where members of the Na-Ca family of alteration assemblages are present in porphyry systems, many lines of evidence-including isotopic compositions of minerals and the geologic alteration zoning patterns-are consistent with an origin by incursion of saline external fluids. Where Na-Ca alteration is present, it is best developed at relatively deep levels of porphyry systems. Several Laramide systems that are well exposed at comparably deep levels lack Na-Ca alteration, probably because sources of saline fluid were absent or hydrologic conditions were unfavorable for the incursion of saline external fluids. Though similar in temperatures, isotopic compositions, mineral assemblages, and zoning patterns, Na-Ca alteration in Laramide systems is volumetrically smaller than in Jurassic systems documented in the western United States, probably because saline external fluids were much less abundant during the Laramide after a tectonically driven excursion in paleoclimate from arid to humid conditions.