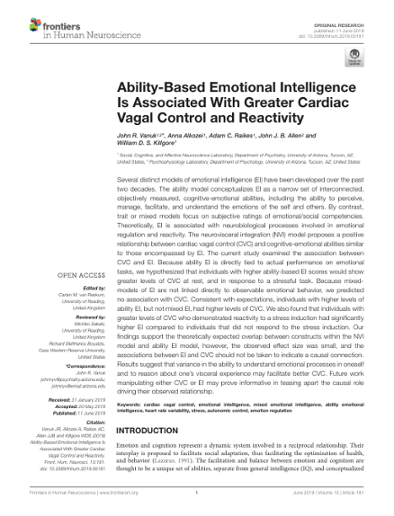 © 2019 Vanuk, Alkozei, Raikes, Allen and Killgore. This is an open-access article distributed under the terms of the Creative Commons Attribution License (CC BY). The use, distribution or reproduction in other forums is permitted, provided the original author(s) and the copyright owner(s) are credited and that the original publication in this journal is cited, in accordance with accepted academic practice. No use, distribution or reproduction is permitted which does not comply with these terms.

Several distinct models of emotional intelligence (EI) have been developed over the past two decades. The ability model conceptualizes EI as a narrow set of interconnected, objectively measured, cognitive-emotional abilities, including the ability to perceive, manage, facilitate, and understand the emotions of the self and others. By contrast, trait or mixed models focus on subjective ratings of emotional/social competencies. Theoretically, EI is associated with neurobiological processes involved in emotional regulation and reactivity. The neurovisceral integration (NVI) model proposes a positive relationship between cardiac vagal control (CVC) and cognitive-emotional abilities similar to those encompassed by EI. The current study examined the association between CVC and EI. Because ability EI is directly tied to actual performance on emotional tasks, we hypothesized that individuals with higher ability-based EI scores would show greater levels of CVC at rest, and in response to a stressful task. Because mixedmodels of EI are not linked directly to observable emotional behavior, we predicted no association with CVC. Consistent with expectations, individuals with higher levels of ability EI, but not mixed EI, had higher levels of CVC. We also found that individuals with greater levels of CVC who demonstrated reactivity to a stress induction had significantly higher EI compared to individuals that did not respond to the stress induction. Our findings support the theoretically expected overlap between constructs within the NVI model and ability EI model, however, the observed effect size was small, and the associations between EI and CVC should not be taken to indicate a causal connection. Results suggest that variance in the ability to understand emotional processes in oneself and to reason about one's visceral experience may facilitate better CVC. Future work manipulating either CVC or EI may prove informative in teasing apart the causal role driving their observed relationship.