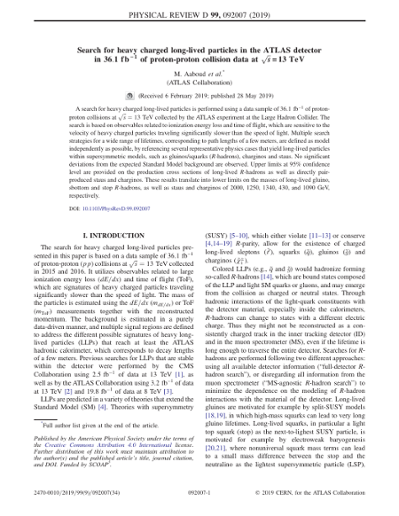 © 2019 CERN, for the ATLAS Collaboration

A search for heavy charged long-lived particles is performed using a data sample of 36.1 fb(-1) of protonproton collisions at root s = 13 TeV collected by the ATLAS experiment at the Large Hadron Collider. The search is based on observables related to ionization energy loss and time of flight, which are sensitive to the velocity of heavy charged particles traveling significantly slower than the speed of light. Multiple search strategies for a wide range of lifetimes, corresponding to path lengths of a few meters, are defined as model independently as possible, by referencing several representative physics cases that yield long-lived particles within supersymmetric models, such as gluinos/squarks (R-hadrons), charginos and staus. No significant deviations from the expected Standard Model background are observed. Upper limits at 95% confidence level are provided on the production cross sections of long-lived R-hadrons as well as directly pair-produced staus and charginos. These results translate into lower limits on the masses of long-lived gluino, sbottom and stop R-hadrons, as well as staus and charginos of 2000, 1250, 1340, 430, and 1090 GeV, respectively.