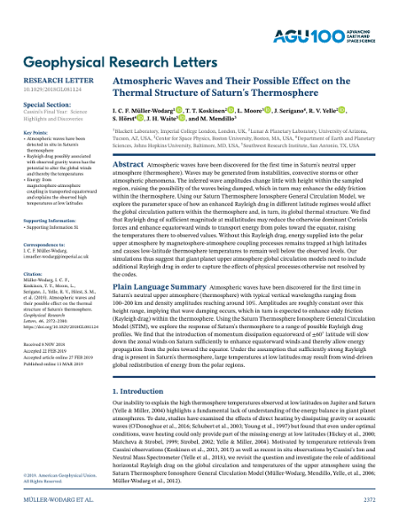 Atmospheric waves have been discovered for the first time in Saturn's neutral upper atmosphere (thermosphere). Waves may be generated from instabilities, convective storms or other atmospheric phenomena. The inferred wave amplitudes change little with height within the sampled region, raising the possibility of the waves being damped, which in turn may enhance the eddy friction within the thermosphere. Using our Saturn Thermosphere Ionosphere General Circulation Model, we explore the parameter space of how an enhanced Rayleigh drag in different latitude regimes would affect the global circulation pattern within the thermosphere and, in turn, its global thermal structure. We find that Rayleigh drag of sufficient magnitude at midlatitudes may reduce the otherwise dominant Coriolis forces and enhance equatorward winds to transport energy from poles toward the equator, raising the temperatures there to observed values. Without this Rayleigh drag, energy supplied into the polar upper atmosphere by magnetosphere-atmosphere coupling processes remains trapped at high latitudes and causes low-latitude thermosphere temperatures to remain well below the observed levels. Our simulations thus suggest that giant planet upper atmosphere global circulation models need to include additional Rayleigh drag in order to capture the effects of physical processes otherwise not resolved by the codes. Plain Language Summary Atmospheric waves have been discovered for the first time in Saturn's neutral upper atmosphere (thermosphere) with typical vertical wavelengths ranging from 100-200 km and density amplitudes reaching around 10%. Amplitudes are roughly constant over this height range, implying that wave damping occurs, which in turn is expected to enhance eddy friction (Rayleigh drag) within the thermosphere. Using the Saturn Thermosphere Ionosphere General Circulation Model (STIM), we explore the response of Saturn's thermosphere to a range of possible Rayleigh drag profiles. We find that the introduction of momentum dissipation equatorward of 60 degrees latitude will slow down the zonal winds on Saturn sufficiently to enhance equatorward winds and thereby allow energy propagation from the poles toward the equator. Under the assumption that sufficiently strong Rayleigh drag is present in Saturn's thermosphere, large temperatures at low latitudes may result from wind-driven global redistribution of energy from the polar regions.