Investigation of a possible malaria epidemic in an illegal gold mine in French Guiana: an original approach in the remote Amazonian forest 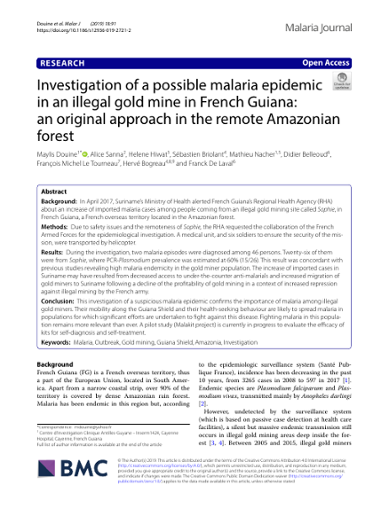 © The Author(s) 2019. This article is distributed under the terms of the Creative Commons Attribution 4.0 International License.

Background: In April 2017, Suriname's Ministry of Health alerted French Guiana's Regional Health Agency (RHA) about an increase of imported malaria cases among people coming from an illegal gold mining site called Sophie, in French Guiana, a French overseas territory located in the Amazonian forest. Methods: Due to safety issues and the remoteness of Sophie, the RHA requested the collaboration of the French Armed Forces for the epidemiological investigation. A medical unit, and six soldiers to ensure the security of the mission, were transported by helicopter. Results: During the investigation, two malaria episodes were diagnosed among 46 persons. Twenty-six of them were from Sophie, where PCR-Plasmodium prevalence was estimated at 60% (15/26). This result was concordant with previous studies revealing high malaria endemicity in the gold miner population. The increase of imported cases in Suriname may have resulted from decreased access to under-the-counter anti-malarials and increased migration of gold miners to Suriname following a decline of the profitability of gold mining in a context of increased repression against illegal mining by the French army. Conclusion: This investigation of a suspicious malaria epidemic confirms the importance of malaria among illegal gold miners. Their mobility along the Guiana Shield and their health-seeking behaviour are likely to spread malaria in populations for which significant efforts are undertaken to fight against this disease. Fighting malaria in this population remains more relevant than ever. A pilot study (Malakit project) is currently in progress to evaluate the efficacy of kits for self-diagnosis and self-treatment.