The HST Large Programme on NGC 6752 – II. Multiple populations at the bottom of the main sequence probed in NIR 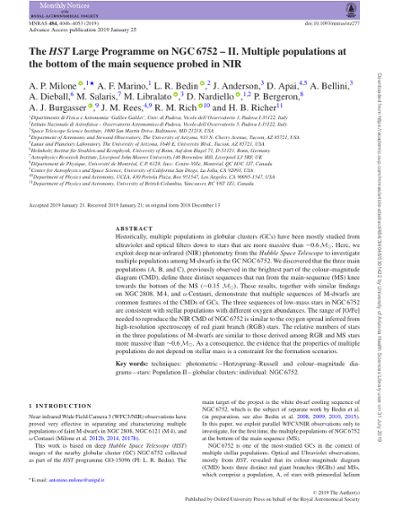 Historically, multiple populations in globular clusters (GCs) have been mostly studied from ultraviolet and optical filters down to stars that are more massive than similar to 0.6,M-circle dot. Here, we exploit deep near-infrared (NIR) photometry from the Hubble Space Telescope to investigate multiple populations among M-dwarfs in the GC NGC 6752. We discovered that the three main populations (A, B, and C), previously observed in the brightest part of the colour-magnitude diagram (CMD), define three distinct sequences that run from the main-sequence (MS) knee towards the bottom of the MS (similar to 0.15 M-circle dot). These results, together with similar findings on NGC 2808, M 4, and omega Centauri, demonstrate that multiple sequences of M-dwarfs are common features of the CMDs of GCs. The three sequences of low-mass stars in NGC 6752 are consistent with stellar populations with different oxygen abundances. The range of [O/Fe] needed to reproduce the NIR CMD of NGC 6752 is similar to the oxygen spread inferred from high-resolution spectroscopy of red giant branch (RGB) stars. The relative numbers of stars in the three populations of M-dwarfs are similar to those derived among RGB and MS stars more massive than similar to 0.6 M-circle dot. As a consequence, the evidence that the properties of multiple populations do not depend on stellar mass is a constraint for the formation scenarios.