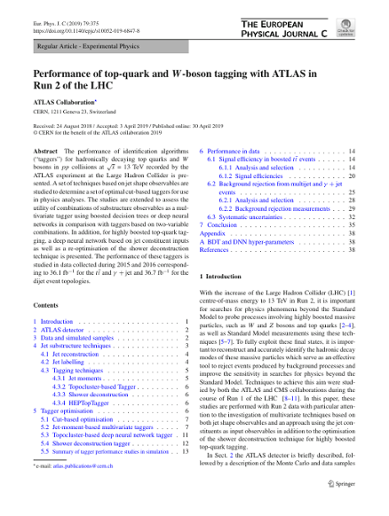 © CERN for the benefit of the ATLAS collaboration 2019

The performance of identification algorithms (taggers) for hadronically decaying top quarks and W bosons in pp collisions at = 13TeV recorded by the ATLAS experiment at the Large Hadron Collider is presented. A set of techniques based on jet shape observables are studied to determine a set of optimal cut-based taggers for use in physics analyses. The studies are extended to assess the utility of combinations of substructure observables as a multivariate tagger using boosted decision trees or deep neural networks in comparison with taggers based on two-variable combinations. In addition, for highly boosted top-quark tagging, a deep neural network based on jet constituent inputs as well as a re-optimisation of the shower deconstruction technique is presented. The performance of these taggers is studied in data collected during 2015 and 2016 corresponding to 36.1fb-1 for the tt and +jet and 36.7-1 for the dijet event topologies.