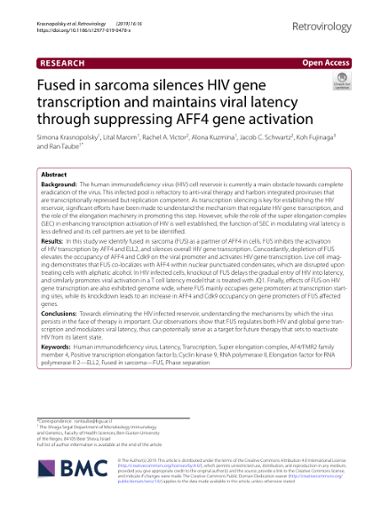 © The Author(s) 2019. This article is distributed under the terms of the Creative Commons Attribution 4.0 International License (http://creat iveco mmons .org/licen ses/by/4.0/), which permits unrestricted use, distribution, and reproduction in any medium, provided you give appropriate credit to the original author(s) and the source, provide a link to the Creative Commons license, and indicate if changes were made. The Creative Commons Public Domain Dedication waiver (http://creat iveco mmons .org/ publi cdoma in/zero/1.0/) applies to the data made available in this article, unless otherwise stated.

Background: The human immunodeficiency virus (HIV) cell reservoir is currently a main obstacle towards complete eradication of the virus. This infected pool is refractory to anti-viral therapy and harbors integrated proviruses that are transcriptionally repressed but replication competent. As transcription silencing is key for establishing the HIV reservoir, significant efforts have been made to understand the mechanism that regulate HIV gene transcription, and the role of the elongation machinery in promoting this step. However, while the role of the super elongation complex (SEC) in enhancing transcription activation of HIV is well established, the function of SEC in modulating viral latency is less defined and its cell partners are yet to be identified. Results: In this study we identify fused in sarcoma (FUS) as a partner of AFF4 in cells. FUS inhibits the activation of HIV transcription by AFF4 and ELL2, and silences overall HIV gene transcription. Concordantly, depletion of FUS elevates the occupancy of AFF4 and Cdk9 on the viral promoter and activates HIV gene transcription. Live cell imaging demonstrates that FUS co-localizes with AFF4 within nuclear punctuated condensates, which are disrupted upon treating cells with aliphatic alcohol. In HIV infected cells, knockout of FUS delays the gradual entry of HIV into latency, and similarly promotes viral activation in a T cell latency model that is treated with JQ1. Finally, effects of FUS on HIV gene transcription are also exhibited genome wide, where FUS mainly occupies gene promoters at transcription starting sites, while its knockdown leads to an increase in AFF4 and Cdk9 occupancy on gene promoters of FUS affected genes. Conclusions: Towards eliminating the HIV infected reservoir, understanding the mechanisms by which the virus persists in the face of therapy is important. Our observations show that FUS regulates both HIV and global gene transcription and modulates viral latency, thus can potentially serve as a target for future therapy that sets to reactivate HIV from its latent state.