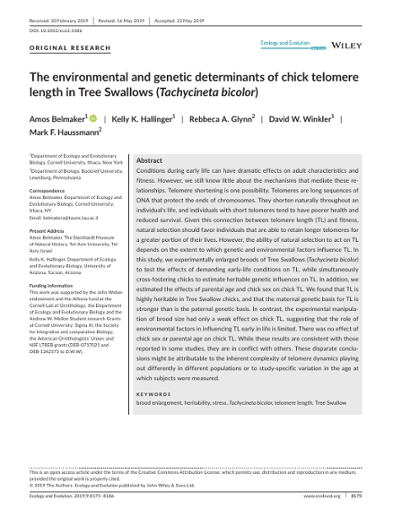 © 2019 The Authors. Ecology and Evolution published by John Wiley & Sons Ltd. This is an open access article under the terms of the Creative Commons Attribution License, which permits use, distribution and reproduction in any medium, provided the original work is properly cited.

Conditions during early life can have dramatic effects on adult characteristics and fitness. However, we still know little about the mechanisms that mediate these relationships. Telomere shortening is one possibility. Telomeres are long sequences of DNA that protect the ends of chromosomes. They shorten naturally throughout an individual's life, and individuals with short telomeres tend to have poorer health and reduced survival. Given this connection between telomere length (TL) and fitness, natural selection should favor individuals that are able to retain longer telomeres for a greater portion of their lives. However, the ability of natural selection to act on TL depends on the extent to which genetic and environmental factors influence TL. In this study, we experimentally enlarged broods of Tree Swallows (Tachycineta bicolor) to test the effects of demanding early-life conditions on TL, while simultaneously cross-fostering chicks to estimate heritable genetic influences on TL. In addition, we estimated the effects of parental age and chick sex on chick TL. We found that TL is highly heritable in Tree Swallow chicks, and that the maternal genetic basis for TL is stronger than is the paternal genetic basis. In contrast, the experimental manipulation of brood size had only a weak effect on chick TL, suggesting that the role of environmental factors in influencing TL early in life is limited. There was no effect of chick sex or parental age on chick TL. While these results are consistent with those reported in some studies, they are in conflict with others. These disparate conclusions might be attributable to the inherent complexity of telomere dynamics playing out differently in different populations or to study-specific variation in the age at which subjects were measured.