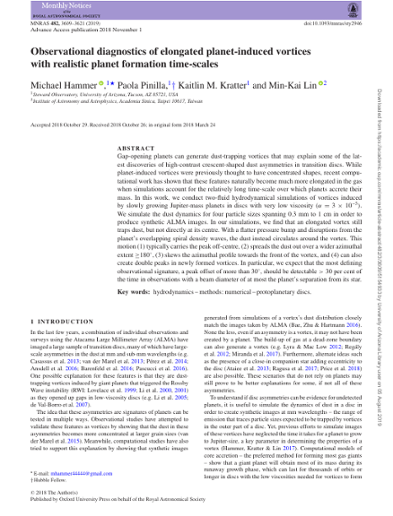 © 2018 The Author(s) Published by Oxford University Press on behalf of the Royal Astronomical Society.

Gap-opening planets can generate dust-trapping vortices that may explain some of the latest discoveries of high-contrast crescent-shaped dust asymmetries in transition discs. While planet-induced vortices were previously thought to have concentrated shapes, recent computational work has shown that these features naturally become much more elongated in the gas when simulations account for the relatively long time-scale over which planets accrete their mass. In this work, we conduct two-fluid hydrodynamical simulations of vortices induced by slowly growing Jupiter-mass planets in discs with very low viscosity (alpha = 3 x 10(-5)). We simulate the dust dynamics for four particle sizes spanning 0.3 mm to 1 cm in order to produce synthetic ALMA images. In our simulations, we find that an elongated vortex still traps dust, but not directly at its centre. With a flatter pressure bump and disruptions from the planet's overlapping spiral density waves, the dust instead circulates around the vortex. This motion (1) typically carries the peak off-centre, (2) spreads the dust out over a wider azimuthal extent >= 180 degrees, (3) skews the azimuthal profile towards the front of the vortex, and (4) can also create double peaks in newly formed vortices. In particular, we expect that the most defining observational signature, a peak offset of more than 30 degrees, should be detectable > 30 per cent of the time in observations with a beam diameter of at most the planet's separation from its star.