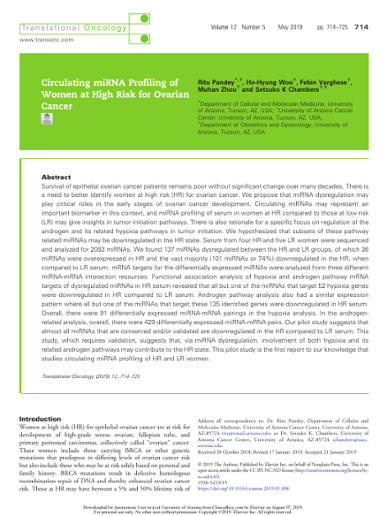 © 2019 The Authors. Published by Elsevier Inc. on behalf of Neoplasia Press, Inc. This is an open access article under the CC BY-NC-ND license.

Survival of epithelial ovarian cancer patients remains poor without significant change over many decades. There is a need to better identify women at high risk (HR) for ovarian cancer. We propose that miRNA dysregulation may play critical roles in the early stages of ovarian cancer development. Circulating miRNAs may represent an important biomarker in this context, and miRNA profiling of serum in women at HR compared to those at low risk (LR) may give insights in tumor initiation pathways. There is also rationale for a specific focus on regulation of the androgen and its related hypoxia pathways in tumor initiation. We hypothesized that subsets of these pathway related miRNAs may be downregulated in the HR state. Serum from four HR and five LR women were sequenced and analyzed for 2083 miRNAs. We found 137 miRNAs dysregulated between the HR and LR groups, of which 36 miRNAs were overexpressed in HR and the vast majority (101 miRNAs or 74%) downregulated in the HR, when compared to LR serum. mRNA targets for the differentially expressed miRNAs were analyzed from three different miRNA-mRNA interaction resources. Functional association analysis of hypoxia and androgen pathway mRNA targets of dysregulated miRNAs in HR serum revealed that all but one of the miRNAs that target 52 hypoxia genes were downregulated in HR compared to LR serum. Androgen pathway analysis also had a similar expression pattern where all but one of the miRNAs that target these 135 identified genes were downregulated in HR serum. Overall, there were 91 differentially expressed miRNA-mRNA pairings in the hypoxia analysis. In the androgen-related analysis, overall, there were 429 differentially expressed miRNA-mRNA pairs. Our pilot study suggests that almost all miRNAs that are conserved and/or validated are downregulated in the HR compared to LR serum. This study, which requires validation, suggests that, via miRNA dysregulation, involvement of both hypoxia and its related androgen pathways may contribute to the HR state. This pilot study is the first report to our knowledge that studies circulating miRNA profiling of HR and LR women.