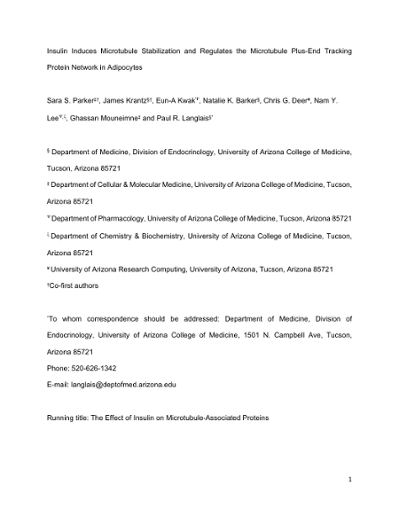 Insulin-stimulated glucose uptake is known to involve microtubules, although the function of microtubules and the microtubule-regulating proteins involved in insulin action are poorly understood. CLASP2, a plus-end tracking microtubule-associated protein (+TIP) that controls microtubule dynamics, was recently implicated as the first +TIP associated with insulin-regulated glucose uptake. Here, using protein-specific targeted quantitative phosphoproteomics within 3T3-L1 adipocytes, we discovered that insulin regulates phosphorylation of the CLASP2 network members G2L1, MARK2, CLIP2, AGAP3, and CKAP5 as well as EB1, revealing the existence of a previously unknown microtubule-associated protein system that responds to insulin. To further investigate, G2L1 interactome studies within 3T3-L1 adipocytes revealed that G2L1 coimmunoprecipitates CLASP2 and CLIP2 as well as the master integrators of +TIP assembly, the end binding (EB) proteins. Live-cell total internal reflection fluorescence microscopy in adipocytes revealed G2L1 and CLASP2 colocalize on microtubule plus-ends. We found that although insulin increases the number of CLASP2-containing plus-ends, insulin treatment simultaneously decreases CLASP2-containing plus-end velocity. In addition, we discovered that insulin stimulates redistribution of CLASP2 and G2L1 from exclusive plus-end tracking to "trailing" behind the growing tip of the microtubule. Insulin treatment increases alpha-tubulin Lysine 40 acetylation, a mechanism that was observed to be regulated by a counterbalance between GSK3 and mTOR, and led to microtubule stabilization. Our studies introduce insulin-stimulated microtubule stabilization and plus-end trailing of +TIPs as new modes of insulin action and reveal the likelihood that a network of microtubule-associated proteins synergize to coordinate insulin-regulated microtubule dynamics.