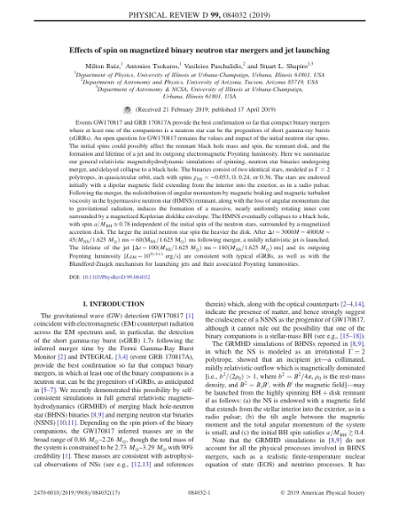 Events GW170817 and GRB 170817A provide the best confirmation so far that compact binary mergers where at least one of the companions is a neutron star can be the progenitors of short gamma-ray bursts (sGRBs). An open question for GW170817 remains the values and impact of the initial neutron star spins. The initial spins could possibly affect the remnant black hole mass and spin, the remnant disk, and the formation and lifetime of a jet and its outgoing electromagnetic Poynting luminosity. Here we summarize our general relativistic magnetohydrodynamic simulations of spinning, neutron star binaries undergoing merger, and delayed collapse to a black hole. The binaries consist of two identical stars, modeled as Gamma = 2 polytropes, in quasicircular orbit, each with spins chi(Ns) = -0.053, 0, 0.24, or 0.36. The stars arc endowed initially with a dipolar magnetic field extending from the interior into the exterior, as in a radio pulsar. Following the merger, the redistribution of angular momentum by magnetic braking and magnetic turbulent viscosity in the hypermassive neutron star (HMNS) remnant, along with the loss of angular momentum due to gravitational radiation, induces the formation of a massive, nearly uniformly rotating inner core surrounded by a magnetized Keplerian disklike envelope. The HMNS eventually collapses to a black hole, with spin a/M-BH similar or equal to 0.78 independent of the initial spin of the neutron stars, surrounded by a magnetized accretion disk. The larger the initial neutron star spin the heavier the disk. After Delta t similar to 3000M - 4000M similar to 45(M-Ns /1.625 M-circle dot) ms - 60(M-Ns /1.625 M-circle dot) ms following merger, a mildly relativistic jet is launched. The lifetime of the jet [Delta t similar to 100(M-Ns 11.625 M-circle dot) ms - 140(M-Ns /1.625 M-circle dot) ms] and its outgoing Poynting luminosity [L-Em similar to 10(51.5 +/- 1)erg /s] are consistent with typical sGRBs, as well as with the Blandford-Znajek mechanism for launching jets and their associated Poynting luminosities.