Not so Dangerous After All? Venom Composition and Potency of the Pholcid (Daddy Long-Leg) Spider Physocyclus mexicanus 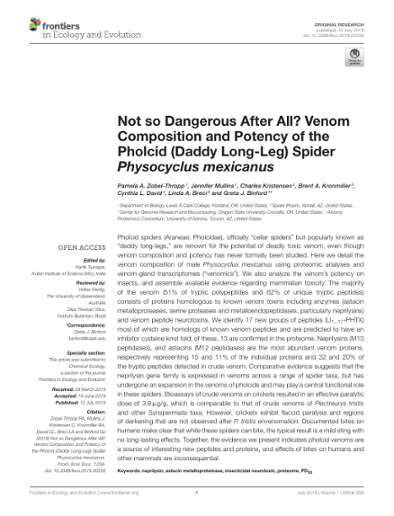 FRONTIERS IN ECOLOGY AND EVOLUTION

Copyright © 2019 Zobel-Thropp, Mullins, Kristensen, Kronmiller, David, Breci and Binford. This is an open-access article distributed under the terms of the Creative Commons Attribution License (CC BY).

Pholcid spiders (Araneae: Pholcidae), officially "cellar spiders" but popularly known as "daddy long-legs," are renown for the potential of deadly toxic venom, even though venom composition and potency has never formally been studied. Here we detail the venom composition of male Physocyclus mexicanus using proteomic analyses and venom-gland transcriptomes ("venomics"). We also analyze the venom's potency on insects, and assemble available evidence regarding mammalian toxicity. The majority of the venom (51% of tryptic polypeptides and 62% of unique tryptic peptides) consists of proteins homologous to known venom toxins including enzymes (astacin metalloproteases, serine proteases and metalloendopeptidases, particularly neprilysins) and venom peptide neurotoxins. We identify 17 new groups of peptides (U1-17-PHTX) most of which are homologs of known venom peptides and are predicted to have an inhibitor cysteine knot fold; of these, 13 are confirmed in the proteome. Neprilysins (M13 peptidases), and astacins (M12 peptidases) are the most abundant venom proteins, respectively representing 15 and 11% of the individual proteins and 32 and 20% of the tryptic peptides detected in crude venom. Comparative evidence suggests that the neprilysin gene family is expressed in venoms across a range of spider taxa, but has undergone an expansion in the venoms of pholcids and may play a central functional role in these spiders. Bioassays of crude venoms on crickets resulted in an effective paralytic dose of 3.9 mu g/g, which is comparable to that of crude venoms of Plectreurys tristis and other Synspermiata taxa. However, crickets exhibit flaccid paralysis and regions of darkening that are not observed after P. tristis envenomation. Documented bites on humans make clear that while these spiders can bite, the typical result is a mild sting with no long-lasting effects. Together, the evidence we present indicates pholcid venoms are a source of interesting new peptides and proteins, and effects of bites on humans and other mammals are inconsequential.

Except where otherwise noted, this item's license is described as Copyright © 2019 Zobel-Thropp, Mullins, Kristensen, Kronmiller, David, Breci and Binford. This is an open-access article distributed under the terms of the Creative Commons Attribution License (CC BY).