A Copernican Approach to Brain Advancement: The Paradigm of Allostatic Orchestration 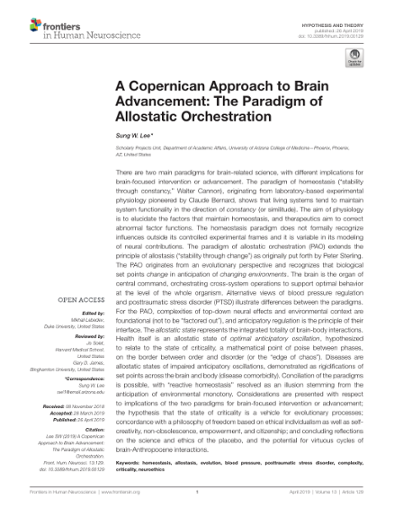 Copyright © 2019 Lee. This is an open-access article distributed under the terms of the Creative Commons Attribution License (CC BY). The use, distribution or reproduction in other forums is permitted, provided the original author(s) and the copyright owner(s) are credited and that the original publication in this journal is cited, in accordance with accepted academic practice. No use, distribution or reproduction is permitted which does not comply with these terms.

There are two main paradigms for brain-related science, with different implications for brain-focused intervention or advancement. The paradigm of homeostasis ("stability through constancy," Walter Cannon), originating from laboratory-based experimental physiology pioneered by Claude Bernard, shows that living systems tend to maintain system functionality in the direction of constancy (or similitude). The aim of physiology is to elucidate the factors that maintain homeostasis, and therapeutics aim to correct abnormal factor functions. The homeostasis paradigm does not formally recognize influences outside its controlled experimental frames and it is variable in its modeling of neural contributions. The paradigm of allostatic orchestration (PAO) extends the principle of allostasis ("stability through change") as originally put forth by Peter Sterling. The PAO originates from an evolutionary perspective and recognizes that biological set points change in anticipation of changing environments. The brain is the organ of central command, orchestrating cross-system operations to support optimal behavior at the level of the whole organism. Alternative views of blood pressure regulation and posttraumatic stress disorder (PTSD) illustrate differences between the paradigms. For the PAO, complexities of top-down neural effects and environmental context are foundational (not to be "factored out"), and anticipatory regulation is the principle of their interface. The allostatic state represents the integrated totality of brain-body interactions. Health itself is an allostatic state of optimal anticipatory oscillation, hypothesized to relate to the state of criticality, a mathematical point of poise between phases, on the border between order and disorder (or the "edge of chaos"). Diseases are allostatic states of impaired anticipatory oscillations, demonstrated as rigidifications of set points across the brain and body (disease comorbidity). Conciliation of the paradigms is possible, with "reactive homeostasis" resolved as an illusion stemming from the anticipation of environmental monotony. Considerations are presented with respect to implications of the two paradigms for brain-focused intervention or advancement; the hypothesis that the state of criticality is a vehicle for evolutionary processes; concordance with a philosophy of freedom based on ethical individualism as well as self-creativity, non-obsolescence, empowerment, and citizenship; and concluding reflections on the science and ethics of the placebo, and the potential for virtuous cycles of brain-Anthropocene interactions.