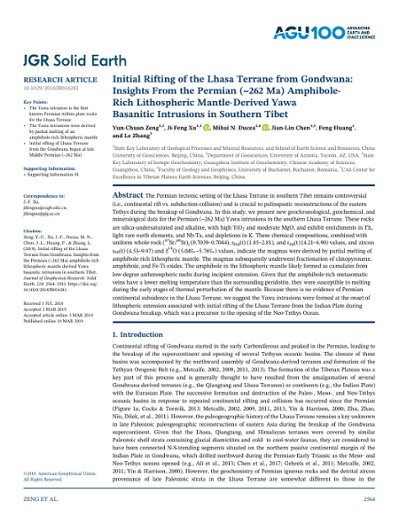 The Permian tectonic setting of the Lhasa Terrane in southern Tibet remains controversial (i.e., continental rift vs. subduction-collision) and is crucial to palinspastic reconstructions of the eastern Tethys during the breakup of Gondwana. In this study, we present new geochronological, geochemical, and mineralogical data for the Permian (262Ma) Yawa intrusions in the southern Lhasa Terrane. These rocks are silica-undersaturated and alkaline, with high TiO2 and moderate MgO, and exhibit enrichments in Th, light rare earth elements, and Nb-Ta, and depletions in K. These chemical compositions, combined with uniform whole-rock (Sr-87/Sr-86)(i) (0.7039-0.7044), epsilon(Nd)(t) (1.85-2.81), and epsilon(Hf)(t) (4.21-6.90) values, and zircon epsilon(Hf)(t) (4.53-9.97) and O-18 (5.04-5.76) values, indicate the magmas were derived by partial melting of amphibole-rich lithospheric mantle. The magmas subsequently underwent fractionation of clinopyroxene, amphibole, and Fe-Ti oxides. The amphibole in the lithospheric mantle likely formed as cumulates from low-degree asthenospheric melts during incipient extension. Given that the amphibole-rich metasomatic veins have a lower melting temperature than the surrounding peridotite, they were susceptible to melting during the early stages of thermal perturbation of the mantle. Because there is no evidence of Permian continental subsidence in the Lhasa Terrane, we suggest the Yawa intrusions were formed at the onset of lithospheric extension associated with initial rifting of the Lhasa Terrane from the Indian Plate during Gondwana breakup, which was a precursor to the opening of the Neo-Tethys Ocean.