The global stability of M33: still a puzzle 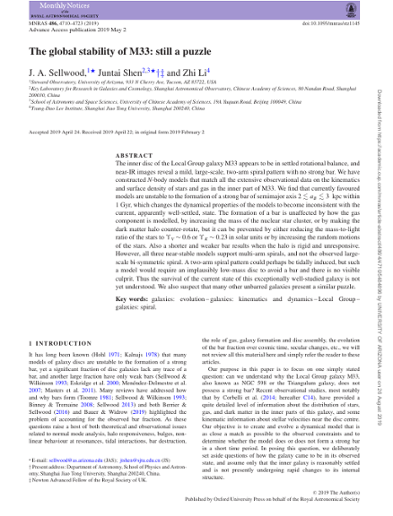 The inner disc of the Local Group galaxy M33 appears to be in settled rotational balance, and near-IR images reveal a mild, large-scale, two-arm spiral pattern with no strong bar. We have constructed N-body models that match all the extensive observational data on the kinematics and surface density of stars and gas in the inner part of M33. We rind that currently favoured models are unstable to the formation of a strong bar of semimajor axis 2 less than or similar to a(B) less than or similar to 3 kpc within 1 Gyr, which changes the dynamical properties of the models to become inconsistent with the current, apparently well-settled, state. The formation of a bar is unaffected by how: the gas component is modelled, by increasing the mass of the nuclear star cluster, or by making the dark matter halo counter-rotate, but it can be prevented by either reducing the mass-to-light ratio of the stars to Y-V similar to 0.6 or Y-K similar to 0.23 in solar units or by increasing the random motions of the stars. Also a shorter and weaker bar results when the halo is rigid and unresponsive. However, all three near-stable models support multi-arm spirals, and not the observed largescale hi-symmetric spiral, A two-arm spiral pattern could perhaps be tidally induced, but such a model would require an implausibly low-mass disc to avoid a bar and there is no visible culprit:. Thus the survival of the current state of this exceptionally well-studied galaxy is not yet understood. We also suspect that many other unbarred galaxies present a similar puzzle.