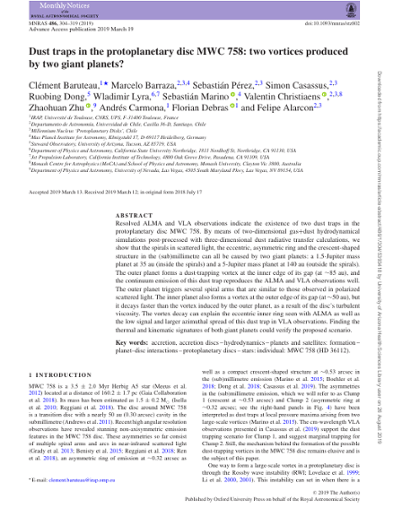 Resolved ALMA and VLA observations indicate the existence of two dust traps in the protoplanetary disc MWC 758. By means of two-dimensional gas+dust hydrodynamical simulations post-processed with three-dimensional dust radiative transfer calculations, we show that the spirals in scattered light, the eccentric, asymmetric ring and the crescent-shaped structure in the (sub) millimetre can all be caused by two giant planets: a 1.5-Jupiter mass planet at 35 au (inside the spirals) and a 5-Jupiter mass planet at 140 au (outside the spirals). The outer planet forms a dust-trapping vortex at the inner edge of its gap (at similar to 85 au), and the continuum emission of this dust trap reproduces the ALMA and VLA observations well. The outer planet triggers several spiral arms that are similar to those observed in polarized scattered light. The inner planet also forms a vortex at the outer edge of its gap (at similar to 50 au), but it decays faster than the vortex induced by the outer planet, as a result of the disc's turbulent viscosity. The vortex decay can explain the eccentric inner ring seen with ALMA as well as the low signal and larger azimuthal spread of this dust trap in VLA observations. Finding the thermal and kinematic signatures of both giant planets could verify the proposed scenario.