The newborn planet population emerging from ring-like structures in discs 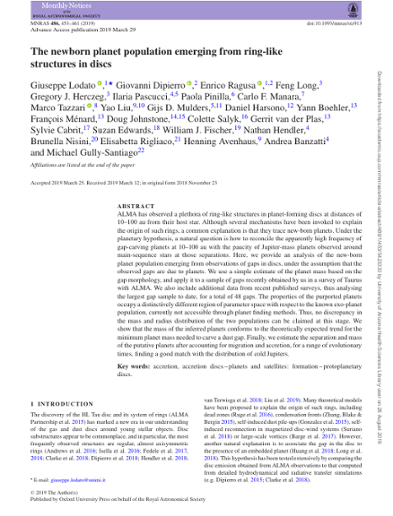 ALMA has observed a plethora of ring-like structures in planet-forming discs at distances of 10-100 au from their host star. Although several mechanisms have been invoked to explain the origin of such rings, a common explanation is that they trace new-born planets. Under the planetary hypothesis, a natural question is how to reconcile the apparently high frequency of gap-carving planets at 10-100 au with the paucity of Jupiter-mass planets observed around main-sequence stars at those separations. Here, we provide an analysis of the new-born planet population emerging from observations of gaps in discs, under the assumption that the observed gaps are due to planets. We use a simple estimate of the planet mass based on the gap morphology, and apply it to a sample of gaps recently obtained by us in a survey of Taurus with ALMA. We also include additional data from recent published surveys, thus analysing the largest gap sample to date, for a total of 48 gaps. The properties of the purported planets occupy a distinctively different region of parameter space with respect to the known exo-planet population, currently not accessible through planet finding methods. Thus, no discrepancy in the mass and radius distribution of the two populations can be claimed at this stage. We show that the mass of the inferred planets conforms to the theoretically expected trend for the minimum planet mass needed to carve a dust gap. Finally, we estimate the separation and mass of the putative planets after accounting for migration and accretion, for a range of evolutionary times, finding a good match with the distribution of cold Jupiters.