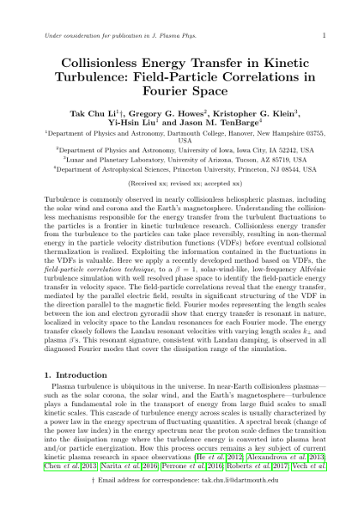 Turbulence is commonly observed in nearly collisionless heliospheric plasmas, including the solar wind and corona and the Earth's magnetosphere. Understanding the collisionless mechanisms responsible for the energy transfer from the turbulent fluctuations to the particles is a frontier in kinetic turbulence research. Collisionless energy transfer from the turbulence to the particles can take place reversibly, resulting in non-thermal energy in the particle velocity distribution functions (VDFs) before eventual collisional thermalization is realized. Exploiting the information contained in the fluctuations in the VDFs is valuable. Here we apply a recently developed method based on VDFs, the field-particle correlation technique, to a beta = 1, solar-wind-like, low-frequency Alfvenic turbulence simulation with well-resolved phase space to identify the field-particle energy transfer in velocity space. The field-particle correlations reveal that the energy transfer, mediated by the parallel electric field, results in significant structuring of the VDF in the direction parallel to the magnetic field. Fourier modes representing the length scales between the ion and electron gyroradii show that energy transfer is resonant in nature, localized in velocity space to the Landau resonances for each Fourier mode. The energy transfer closely follows the Landau resonant velocities with varying perpendicular wavenumber k(perpendicular to) and plasma beta. This resonant signature, consistent with Landau damping, is observed in all diagnosed Fourier modes that cover the dissipation range of the simulation.