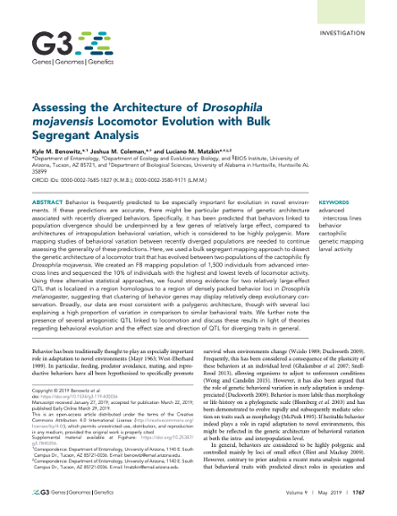 © 2019 Benowitz et al. This is an open-access article distributed under the terms of the Creative Commons Attribution 4.0 International License (http://creativecommons.org/ licenses/by/4.0/), which permits unrestricted use, distribution, and reproduction in any medium, provided the original work is properly cited.

Behavior is frequently predicted to be especially important for evolution in novel environments. If these predictions are accurate, there might be particular patterns of genetic architecture associated with recently diverged behaviors. Specifically, it has been predicted that behaviors linked to population divergence should be underpinned by a few genes of relatively large effect, compared to architectures of intrapopulation behavioral variation, which is considered to be highly polygenic. More mapping studies of behavioral variation between recently diverged populations are needed to continue assessing the generality of these predictions. Here, we used a bulk segregant mapping approach to dissect the genetic architecture of a locomotor trait that has evolved between two populations of the cactophilic fly Drosophila mojavensis We created an F8 mapping population of 1,500 individuals from advanced intercross lines and sequenced the 10% of individuals with the highest and lowest levels of locomotor activity. Using three alternative statistical approaches, we found strong evidence for two relatively large-effect QTL that is localized in a region homologous to a region of densely packed behavior loci in Drosophila melanogaster, suggesting that clustering of behavior genes may display relatively deep evolutionary conservation. Broadly, our data are most consistent with a polygenic architecture, though with several loci explaining a high proportion of variation in comparison to similar behavioral traits. We further note the presence of several antagonistic QTL linked to locomotion and discuss these results in light of theories regarding behavioral evolution and the effect size and direction of QTL for diverging traits in general.