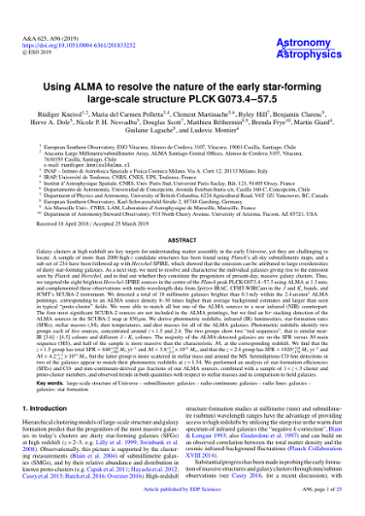 Galaxy clusters at high redshift are key targets for understanding matter assembly in the early Universe, yet they are challenging to locate. A sample of more than 2000 high-z candidate structures has been found using Planck's all-sky submillimetre maps, and a sub-set of 234 have been followed up with Herschel-SPIRE, which showed that the emission can be attributed to large overdensities of dusty star-forming galaxies. As a next step, we need to resolve and characterise the individual galaxies giving rise to the emission seen by Planck and Herschel, and to find out whether they constitute the progenitors of present-day, massive galaxy clusters. Thus, we targeted the eight brightest Herschel-SPIRE sources in the centre of the Planck peak PLCK G073.4-57.5 using ALMA at 1.3 mm, and complemented these observations with multi-wavelength data from Spitzer-IRAC, CFHT-WIRCam in the J and K-s bands, and JCMT's SCUBA-2 instrument. We detected a total of 18 millimetre galaxies brighter than 0.3 mJy within the 2.4 arcmin(2) ALMA pointings, corresponding to an ALMA source density 8-30 times higher than average background estimates and larger than seen in typical "proto-cluster" fields. We were able to match all but one of the ALMA sources to a near infrared (NIR) counterpart. The four most significant SCUBA-2 sources are not included in the ALMA pointings, but we find an 8 sigma stacking detection of the ALMA sources in the SCUBA-2 map at 850 mu m. We derive photometric redshifts, infrared (IR) luminosities, star-formation rates (SFRs), stellar masses (M), dust temperatures, and dust masses for all of the ALMA galaxies. Photometric redshifts identify two groups each of five sources, concentrated around z similar or equal to 1.5 and 2.4. The two groups show two "red sequences", that is similar near-IR [3.6] - [4.5] colours and different J - K-s colours. The majority of the ALMA-detected galaxies are on the SFR versus M main sequence (MS), and half of the sample is more massive than the characteristic M-* at the corresponding redshift. We find that the z similar or equal to 1.5 group has total SFR = 840(-100)(+120) M-circle dot yr(-1) and M = 5.8(-2.4)(+1.7) x 10(11) M-circle dot, and that the z similar or equal to 2.4 group has SFR = 1020(-170)(+310) M-circle dot yr(-1) and M = 4.2(-2.1)(+1.5) x 10(11) M-circle dot, but the latter group is more scattered in stellar mass and around the MS. Serendipitous CO line detections in two of the galaxies appear to match their photometric redshifts at z = 1.54. We performed an analysis of star-formation efficiencies (SFEs) and CO- and mm-continuum-derived gas fractions of our ALMA sources, combined with a sample of 1 < z < 3 cluster and proto-cluster members, and observed trends in both quantities with respect to stellar masses and in comparison to field galaxies.