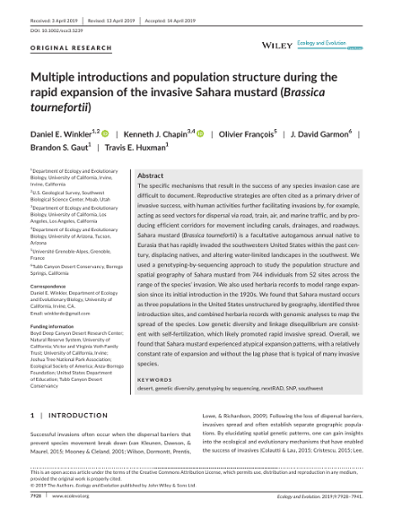 Copyright © 2019 The Authors. Ecology and Evolution published by John Wiley & Sons Ltd. This is an open access article under the terms of the Creative Commons Attribution License, which permits use, distribution and reproduction in any medium, provided the original work is properly cited.

The specific mechanisms that result in the success of any species invasion case are difficult to document. Reproductive strategies are often cited as a primary driver of invasive success, with human activities further facilitating invasions by, for example, acting as seed vectors for dispersal via road, train, air, and marine traffic, and by producing efficient corridors for movement including canals, drainages, and roadways. Sahara mustard (Brassica tournefortii) is a facultative autogamous annual native to Eurasia that has rapidly invaded the southwestern United States within the past century, displacing natives, and altering water-limited landscapes in the southwest. We used a genotyping-by-sequencing approach to study the population structure and spatial geography of Sahara mustard from 744 individuals from 52 sites across the range of the species' invasion. We also used herbaria records to model range expansion since its initial introduction in the 1920s. We found that Sahara mustard occurs as three populations in the United States unstructured by geography, identified three introduction sites, and combined herbaria records with genomic analyses to map the spread of the species. Low genetic diversity and linkage disequilibrium are consistent with self-fertilization, which likely promoted rapid invasive spread. Overall, we found that Sahara mustard experienced atypical expansion patterns, with a relatively constant rate of expansion and without the lag phase that is typical of many invasive species.