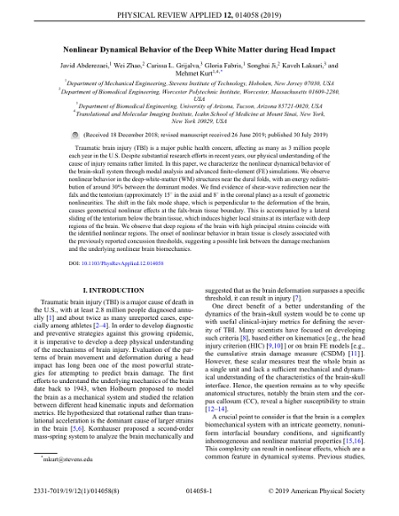 Traumatic brain injury (TBI) is a major public health concern, affecting as many as 3 million people each year in the U.S. Despite substantial research efforts in recent years, our physical understanding of the cause of injury remains rather limited. In this paper, we characterize the nonlinear dynamical behavior of the brain-skull system through modal analysis and advanced finite-element (FE) simulations. We observe nonlinear behavior in the deep-white-matter (WM) structures near the dural folds, with an energy redistribution of around 30% between the dominant modes. We find evidence of shear-wave redirection near the falx and the tentorium (approximately 15 degrees in the axial and 8 degrees in the coronal plane) as a result of geometric nonlinearities. The shift in the falx mode shape, which is perpendicular to the deformation of the brain, causes geometrical nonlinear effects at the falx-brain tissue boundary. This is accompanied by a lateral sliding of the tentorium below the brain tissue, which induces higher local strains at its interface with deep regions of the brain. We observe that deep regions of the brain with high principal strains coincide with the identified nonlinear regions. The onset of nonlinear behavior in brain tissue is closely associated with the previously reported concussion thresholds, suggesting a possible link between the damage mechanism and the underlying nonlinear brain biomechanics.