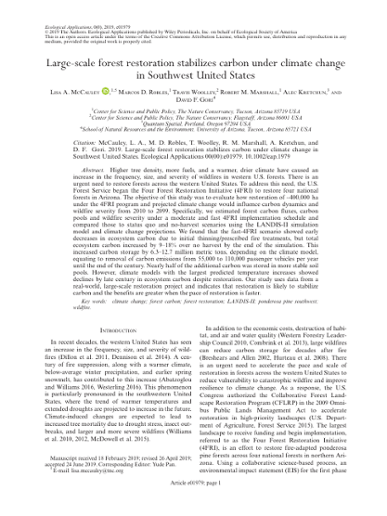 © 2019 The Authors. Ecological Applications published by Wiley Periodicals, Inc. on behalf of Ecological Society of America. This is an open access article under the terms of the Creative Commons Attribution License, which permits use, distribution and reproduction in any medium, provided the original work is properly cited.

Higher tree density, more fuels, and a warmer, drier climate have caused an increase in the frequency, size, and severity of wildfires in western U.S. forests. There is an urgent need to restore forests across the western United States. To address this need, the U.S. Forest Service began the Four Forest Restoration Initiative (4FRI) to restore four national forests in Arizona. The objective of this study was to evaluate how restoration of 400,000 ha under the 4FRI program and projected climate change would influence carbon dynamics and wildfire severity from 2010 to 2099. Specifically, we estimated forest carbon fluxes, carbon pools and wildfire severity under a moderate and fast 4FRI implementation schedule and compared those to status quo and no-harvest scenarios using the LANDIS-II simulation model and climate change projections. We found that the fast-4FRI scenario showed early decreases in ecosystem carbon due to initial thinning/prescribed fire treatments, but total ecosystem carbon increased by 9-18% over no harvest by the end of the simulation. This increased carbon storage by 6.3-12.7 million metric tons, depending on the climate model, equating to removal of carbon emissions from 55,000 to 110,000 passenger vehicles per year until the end of the century. Nearly half of the additional carbon was stored in more stable soil pools. However, climate models with the largest predicted temperature increases showed declines by late century in ecosystem carbon despite restoration. Our study uses data from a real-world, large-scale restoration project and indicates that restoration is likely to stabilize carbon and the benefits are greater when the pace of restoration is faster.