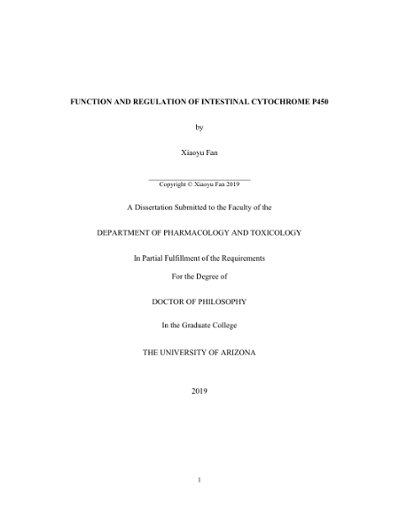 The overall goal of this thesis was to study the function and regulation of intestinal P450s. The central hypothesis is that disease state and environmental pollutant exposure will impact intestinal P450 expression and P450-mediated drug metabolism and alter the bioavailability of orally administered drugs. The specific aims are: 1) to determine whether metabolism by microsomal P450 enzymes in intestine and liver influences the bioavailability of niclosamide, which is a repurposed drug with multiple new therapeutic effects; 2) to examine whether intestinal inflammation will impact expression and activity of intestinal P450s and whether the impact will cause any change in drug pharmacokinetics; 3) to determine the impact of oral arsenic exposure on hepatic and intestinal P450s and P450-mediated drug metabolism. In the first aim (Chapter 2), we have determined whether metabolic disposition by microsomal P450 enzymes in liver and intestine influences niclosamide’s bioavailability in vivo, by comparing niclosamide metabolism in wild-type, liver-Cpr-null (LCN), and intestinal epithelium-Cpr-null (IECN) mice. In vitro stability of niclosamide in microsomal incubations was greater in the intestine than in liver in the presence of NADPH, but it was much greater in liver than in intestine in the presence of UDPGA. NADPH-dependent niclosamide disposition and hydroxy-niclosamide formation were inhibited in LCN mice due to suppressed hepatic P450 activities, but not changed in IECN mice which had suppressed intestinal P450 activities. In intestinal microsomal reactions, hydroxy-niclosamide formation was not detected; but rates of niclosamide-glucuronide formation were greater than in liver of mice. Pharmacokinetic profiles of oral niclosamide were only minimally changed in LCN mice. The changes seem to reflect the compensatory increase in hepatic UDP-glucuronosyltransferase activity. These results suggest that efforts to increase the bioavailability of niclosamide by blocking its metabolism by P450 enzymes unlikely to be fruitful. In contrast, inhibition of niclosamide glucuronidation in both liver and intestine may prove effective for increasing niclosamide’s bioavailability, thereby making it practical to repurpose this drug for treating systemic diseases. In the second aim (Chapter 3), we have determined the impact of intestinal inflammation on the expression of intestinal P450s by using a dextran sulfate sodium salt (DSS)-induced colitis mouse model. Several P450 enzymes were down-regulated at both the mRNA level and the protein level. The in vitro metabolic activities of CYP3A and CYP2C, assayed using diclofenac and nifedipine as substrates, were reduced in intestinal microsomes prepared from mice treated with DSS than in control mice. Several transporters, including both uptake and efflux transporters, were also down-regulated at the mRNA levels. Pharmacokinetic analyses using nifedipine, lovastatin, pravastatin, and cyclosporine A indicated that the extent of impact of DSS treatment on in vivo clearance is drug dependent. Further studies demonstrated that the mRNA levels of several nuclear receptors (NRs), such as FXR, involved in the regulation of P450 expression were repressed after DSS treatment, accompanied by a more drastic downregulation of several FXR target genes. Similar changes in gene expression were also found in the liver. Overall, our results demonstrated that the expression of many P450s, phase II enzymes, and transporters was downregulated in both liver and intestine in the DSS-induced colitis mouse model. This down-regulation could greatly impact drug clearance, thus affecting the systemic bioavailability of some of these drugs. In the third aim (Chapter 4), mice with chronic arsenic oral exposure showed increases in the expression levels of hepatic CYP2A5 and CYP3A11 in a time-dependent manner. An increase in intestinal CYP3A11 expression was also observed. These increases in hepatic and intestinal P450 expression were accompanied by higher metabolic activities toward CYP2A5 substrate coumarin and CYP3A substrate nifedipine. Plasma levels of oxidized nifedipine were elevated in mice with four-week arsenic treatment compared to control mice when tested using a single oral dose of the parent drug nifedipine. Interestingly, arsenic treatment caused differential induction of heme oxygenase-1 (HO-1) in liver (negative) and intestine (positive), and in proximal (protein level only) and distal (both mRNA and protein) segments of intestine, results indicating occurrence of tissue-specific mechanisms of regulation of HO-1 expression by arsenic exposure. Taken together, these data revealed induction of select hepatic and intestinal P450 enzymes and related genes by chronic exposure to a relatively low dose of arsenic in drinking water, which may modify P450-mediated drug disposition and possibly drug toxicity in vivo.