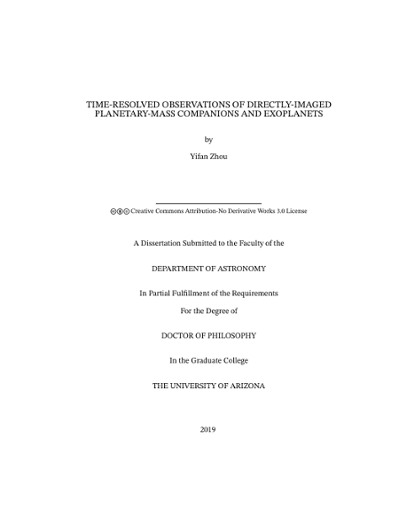 Rotational modulations of brown dwarfs have recently provided powerful constraints on the properties of ultra-cool atmospheres. Furthermore, periodic light curves directly probe the rotational periods of ultra-cool objects. Directly-imaged planetary-mass companions offer unique opportunities in atmospheric studies of exoplanets. They share characteristics of both brown dwarfs and transiting exoplanets, therefore, are critical for connecting atmospheric characterizations for these objects. Applying time-resolved observational techniques to directly-imaged planetary-mass companions will be extremely valuable for constraining cloud models in low-mass and low surface gravity atmospheres and for determining the rotation rate and angular momentum of substellar companions. In this thesis, I present my work on using time-resolved Hubble Space Telescope (HST) Wide Field Camera 3 (WFC3) near-infrared (NIR) observations to study the rotational modulations of directly-imaged planetary-mass companions and exoplanets and investigate their condensate cloud structures. I first present a pilot study of time-resolved high-precision photometric observations of a planetary-mass companion, 2M1207b. In this study, the 2M1207 system was observed with HST/WFC3 in two bands (F125W and F160W) and with two spacecraft roll angles. Using point spread function-based photometry, a nearly photon-noise limited precision was reached for both the primary and the secondary. While the primary was consistent with a flat light curve, the secondary (2M1207b) shows modulations that are clearly detected in the combined light curve as well as in different subsets of the data. The J- and H-band amplitude ratio of 2M1207b is very similar to a field brown dwarf that has an identical spectral type but different J-H color. This study was the first time that the rotation period for a directly imaged extra-solar planetary-mass companion was determined directly. This study also demonstrated the effectiveness of high-contrast HST/WFC3 time-resolved observations in studying the cloud structures of planetary-mass companions and exoplanets. I then offer a model that predicts the charge trap systematics in HST/WFC3 detector and corrects for the ``ramp effect'', which is the dominant source of systematics in WFC3 time-resolved observations. This model is based on a very small number of parameters that are intrinsic to the detector and able to provide near photon noise limited corrections for observations made with both HST staring and scanning modes for transiting exoplanets as well as for staring-mode observations of brown dwarfs. After correction with this model, the light curve of the first orbit in each HST visit has the same photometric precision as subsequent orbits, so data from the first orbit need no longer be discarded. Near IR arrays with the same physical characteristics (e.g., JWST/NIRCam) may also benefit from the extension of this model if similar systematics are observed. I present several studies that are part of the Cloud Atlas project. In the first study, I show results from HST/WFC3/G141 time-resolved observations of HN~Peg~B, an L/T transition brown dwarf companion to a G0V type star. HN~Peg~B had significantly ($4.4\sigma$) lower amplitude rotational modulation in the 1.4-micron water absorption band than in the adjacent continuum, which resembled those of early T type brown dwarfs. In the second and third studies in the Cloud Atlas project, I present HST/WFC3 NIR time-resolved photometry for planetary-mass companions, AB Pic B, 2M0122B, and HD106906b, and new observations for 2M1207b. These studies found tentative modulations ($<2\sigma$) for AB Pic B, 2M0122B, and HD106906b, but cannot reach conclusive results on 2M1207b due to strong systematics introduced by larger-than-usual telescope pointing movements. The relatively low significance levels of the modulations measured cannot rule out the hypothesis that these planetary-mass companions have the same vertical cloud structures as brown dwarfs. The rotation rate measurements, combined with archival period measurements of planetary-mass companions and brown dwarfs, do not support a universal mass-rotation relation. The high precision of these observations and the high occurrence rates of variable low-surface gravity objects motivate high-contrast time-resolved observations with the James Webb Space Telescope.