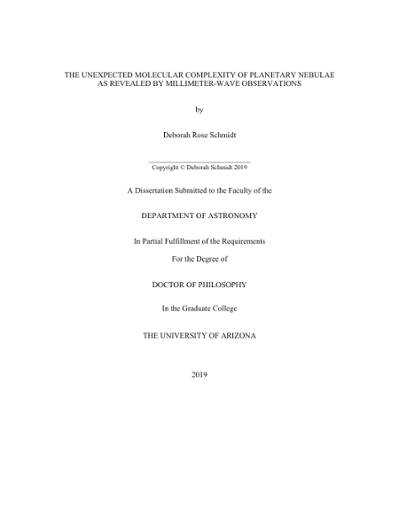 The low temperatures and densities in the extended outer layers of asymptotic giant branch (AGB) stars foster a rich chemistry, enabling the synthesis of a variety of both simple and complex molecules. However, due to the increasing flux of ultraviolet (UV) photons over the course of the star’s late stage evolution, chemical models have predicted that the abundances of these species should be significantly depleted shortly after the onset of the planetary nebula (PN) stage. Millimeter- and submillimeter-wave observations of a variety of PNe of varying morphologies and kinematic ages have been conducted in order to explore the molecular composition of these objects and how the abundances of these molecules evolve over the course of the nebular lifespan. Observations of HCN and HCO+ in seventeen PNe using the 12-m Telescope and Submillimeter Telescope (SMT) of the Arizona Radio Observatory (ARO) resulted in an overall detection rate of ~76%, while subsequent measurements of HNC and CCH in the 11 nebulae in which HCN had been identified yielded detection rates of 100% and ~82%, respectively. These results strongly support the argument that polyatomic molecular material is a common constituent of PN ejecta. Further, the abundances of these molecular species do not vary significantly with nebular age, in contrast to the predictions of chemical models, and they are consistently orders of 1 to 2 magnitudes greater than the abundances measured for diffuse clouds, a strong indication that these compounds are shielded from incident UV radiation in dense clumps of gas and dust which slowly disperse and seed the surrounding interstellar medium (ISM) with molecular material. These conclusions are strengthened by the results of observations of HCN, HNC, CCH, and c-C3H2 at eight positions across the Helix Nebula. Other implications of these studies, particularly with regard to their impact on molecular synthesis, are discussed. Molecular observations of the PN K4-47 using both ARO facilities as well as the Institut de Radioastronomie Millimètrique (IRAM) 30-m Telescope are also presented. A plethora of molecules has been identified in this relatively unstudied source, including CH3CN, H2CNH, and CH3CCH, all of which have been detected for the first time in a PN, as well as numerous 13C-containing species, including all singly- and doubly-13C-substituted variants of HC3N. Particularly unusual are the incredibly low 12C/13C, 14N/15N, and 16O/17O ratios measured in this nebula (2.2 ± 0.8, 13.6 ± 6.5, and 21.4 ± 10.3, respectively), the lowest thus far measured in interstellar gas. The implications of these results on stellar nucleosynthesis and the sources of particular SiC presolar grains are discussed. Finally, modeling results of detections of phosphorus mononitride (PN) and phosphorus monoxide (PO) made in several AGB and supergiant stars are presented, along with the impact of these results on phosphorus chemistry.