Salts in the Air and Water Understanding their Formation Mechanism, Reactions and their Advantages and Disadvantages 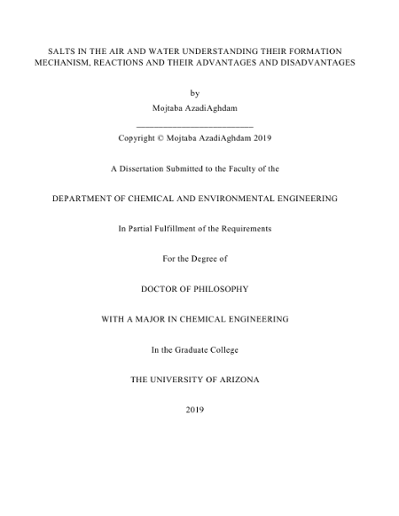 This study utilizes multiple aerosol datasets collected in Metro Manila, Philippines to investigate sea salt aerosol characteristics. This coastal megacity allows for an examination of the impacts of precipitation and mixing of different air masses on sea salt properties, including overall concentration and size-resolved composition, hygroscopicity, and morphology. Intensive size-resolved measurements with a Micro-Orifice Uniform Deposit Impactor (MOUDI) between July-December 2018 revealed the following major results: (i) sea salt levels exhibit wide variability during the wet season, driven primarily by precipitation; (ii) ssNa+ and Cl- peaked in concentration between 1.8 – 5.6 µm, with Cl- depletion varying between 21.3 - 90.7%; (iii) mixing of marine and anthropogenic air masses yielded complex non-spherical shapes with species attached to the outer edges and Na+ uniformly distributed across particles unlike Cl-; (iv) there was significant contamination of sea salt aerosol by a variety of crustal and anthropogenic pollutants (Fe, Al, Ba, Mn, Pb, NO_3^-, V, Zn, NH_4^+); (v) categorization of samples in five different pollutant type categories (Background, Clean, Fire, Continental Pollution and Highest Rain) revealed significant differences in overall Cl- depletion with enhanced depletion in the submicrometer range versus the supermicrometer range; (vi) κ values ranged from 0.02 to 0.31 with a bimodal profile across all stages, with the highest value coincident with the highest sea salt volume fraction in the 3.2-5.6 µm stage, which is far lower than pure sea salt due to the significant influence of organics and black carbon. Analysis of longer term PM2.5 (particulate matter with aerodynamic diameter less than 2.5 µm) and PMcoarse (= PM10 – PM2.5) data between August 2005 and October 2007 confirmed findings from the MOUDI data that more Cl- depletion occurred both in the wet season versus the dry season and on weekdays versus weekend days. The effectiveness of three different pretreatment processes (Fluidized bed crystallization reactor, Ultrafiltration and ferric chloride coagulation and flocculation) in order to remove scale-forming and fouling substances from the wastewater secondary effluent were studied. At optimized conditions, fluidized bed crystallization reactor (FBCR) was able to remove >99.9% of magnesium, 97% of calcium and 42% of silica while ultrafiltration (UF) and ferric chloride coagulation were only able to remove 18% and 16% of the silica concentration, respectively. UF was also able to reduce the turbidity of the SE by 93%. Furthermore, the co-precipitation of different mineral salts with organic matter were also discussed using size exclusion chromatography-organic carbon detector (SEC-OCD). At optimized conditions, ferric chloride resulted in the highest natural organic matter (NOM) reduction (56%) compared to FBCR (26%) and UF (13%). Excitation emission matrix-parallel factor (EEM-PARAFAC) analysis were used to characterize the NOM in the SE and the effluent of these pretreatments. Five different components (three humic substance, one fulvic acid and one protein-like) were detected. FBCR (7-100%) and ferric chloride (26-65%) were able to remove from all 5 types of NOM while UF was only able to reduce the concentration of the protein-like NOM (11%).