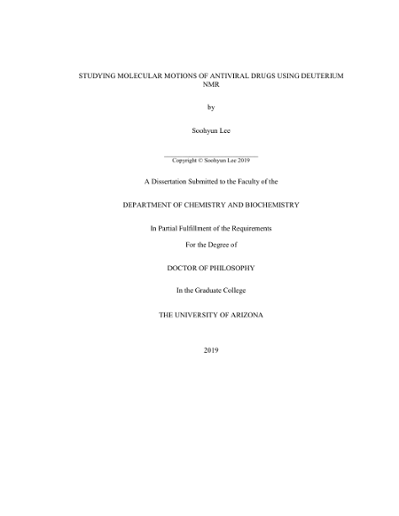 This thesis reports the molecular physics of the solids that have biological importance in the case of antiviral compounds. Chemical structures are important because the structure, together with dynamics give a framework for understanding their molecular properties. However, one does not know whether the formalism of a jump or diffusion model explains the rotational dynamics of the molecules in the polycrystalline sample. This work aims to make use of the rotational motions of the functional groups to obtain the structural and dynamical information at the atomistic level in the case of molecular solids. An important feature of the solid-state 2H NMR experiments is that they clearly explain the type of rotational motions that occur in the molecular solids. The emphasis of this work entails studies of compounds with anti-influenza properties, namely, rimantadine, amantadine, and 3-azaspiro[5.5]undecane (spirane). Significantly, these compounds inhibit the function of the AM2 proton channel of the influenza virus. Furthermore, several compounds with similar structures also show antiviral activities. It follows that studying the molecular motions of these drugs helps one to get a hold on the functionally important molecular motions of such drugs. One can strategically label these molecules with deuterium (2H), an isotope of hydrogen for conducting solid-state 2H NMR experiments. Both 2H NMR line shape and 2H NMR relaxation results obtained in this study report on the structural fluctuations of the drug molecules. They also serve as the control experiments for future experiments, where one studies the drug bound to the proton channel in membrane lipid bilayers. First, the thesis presents the solid-state 2H NMR spectral line shapes of the antiviral compounds in the solid-state at various temperatures. The solid-state 2H NMR spectra show that the residual quadrupolar coupling for the rimantadine-d3 methyl group corresponds to an order parameter value of 0.877, indicating that the angle of wobble is 16.6o. Furthermore, amantadine-d15 showed two different Pake patterns with the quadrupolar single quantum transition values (ν_Q^±) of ±21 kHz and ±43 kHz, corresponding to quadrupolar coupling tensors whose principal axes are oriented at angles of 70.5o and 180o to the molecular axis, respectively. For the 3-azaspiro[5,5]undecane-d4, the ν_Q^± of the nuclear spin in the powder type spectra were ±62.5 kHz corresponding to a quadrupolar coupling of 167 kHz due to the entire molecule. Furthermore, the Zeeman (R1Z) and quadrupolar (R1Q) spin-lattice relaxation rates of polycrystalline rimantadine-d3 and amantadine-d15 compounds at various temperatures were measured. For the continuous diffusion model, nonlinear regression analysis of the relaxation data showed that the preexponential factor for the diffusion constant was (1.46±0.01)×1013 s^(-1), the activation energy was (15.2±0.1) kJ/mol, and the ratio of the parallel to the perpendicular component of the diffusion coefficient was 500. The diffusion constant above was a component parallel to the rotational axis. On the other hand, amantadine-d15 was well explained with the jump model. The jump constants at different temperatures showed that the pre-exponential factor for jump rate was 6.24×1012 s^(-1) and the activation energy as 33.6 kJ/mol. Moreover, for 3-azaspiro[5,5]undecane-d4, the T1Z relaxation times showed the correlation times were much shorter than the inverse of the Larmor frequency. The chapter presented two relaxation times near room temperature. As a further step to the study, the thesis presented the angular anisotropy of the nuclear spin relaxation rates across the powder-type 2H NMR spectra. It was discovered that there was an angular dependence in the R1Z and R1Q spin-lattice constants. Theoretical diffusion model simulations successfully explained the rimantadine-d3 relaxation data. The jump model simulated the angular dependence of the relaxation times of the amantadine-d15 compound. The correlation times, τ00, of the methyl group rotation of the rimantadine-d3 were close to 7 μs. Likewise, the correlation time, τ, of amantadine-d15 were around 0.2 μs. This thesis also presented solid-state 2H NMR data on the hexamethyl-benzene (HMB-d18). The powder type spectra showed υ_Q^± less than ±10.8 kHz, which was due to composite motional narrowing from both the benzene ring and the methyl rotations in the solid-state. However, at temperatures below -113 oC (160 K), the υ_Q^± were observed as ±21 kHz showing the freezing of the ring rotation. Assuming the relaxation contributions from the ring and methyl rotation are statistically independent, the sum of the R1Z and R1Q rates due to individual contributions from each motion successfully explained the observed rates over a wide temperature range. The assumption, which separates the ring and the methyl motions, has been tested at two different magnetic field strengths. Finally, this thesis takes us a step closer to understanding the intramolecular rotations, which can be measured using solid-state 2H NMR spectroscopy. Therefore, 2H NMR spectroscopy is a tool with an atomic resolution that makes molecular dynamics studies uniquely possible in the powder samples by combining line shape and relaxation experiments.