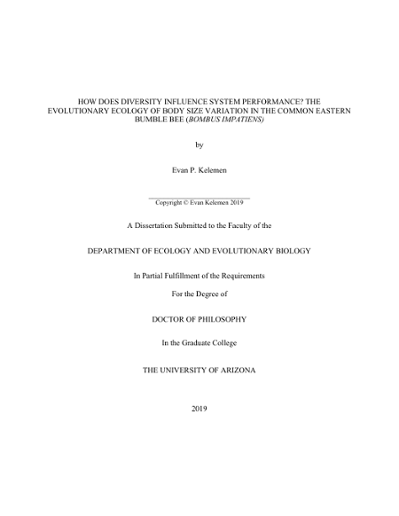 Variation among the components within complex systems exists at all levels throughout biology from molecular networks to ecosystems, and the behavior of these complex systems arises from the actions and interactions of their components. Despite the prevalence of differences among components in such systems, the trait variation displayed by the components in these systems is frequently ignored or assumed beneficial to the system. However, there are situations in which component variation can be costly to a system, especially when the composition of components exist that do not match the task demands on a system. Therefore, we examine here the relationship of component variation to system performance, and why? This dissertation seeks to understand the underlying mechanisms that can generate variation within a system, as well as the conditions under which this variation is expected to evolve. I tested these questions in bumble bees (Bombus spp.), which are a useful system because they exhibit a great variation in body size among workers within the colony, and component variation can be experimentally manipulated (i.e., different-sized workers can be removed) to determine the effects of component diversity on system performance. In my first chapter, I find that size variation within bumble bee (Bombus impatiens) colonies is a plastic trait that responds to environmental conditions. While size variation increases with environmental temperature, temperature itself is not the mechanism that generates size variation, and workers maintain the developing workers (i.e. brood) at a uniform temperature. The production of variation in worker size could be adaptive, however, my results do not exclude the possibility that size variation is a result of an inability of the colony to produce more uniform body sizes. In chapter two, I find that size variation within a colony is not the result of an inability of the colony to control size during development, as not all groups of individuals produced by the colony display such a large size variation as the worker caste. Males and queens raised together with workers display greatly reduced size variation. Additionally, the size variation exhibited by colonies is the lab is not greater than that found in wild colonies. These results suggest that size variation is not a lab artifact and may be common across environments, and that colonies can control the amount of diversity produced. Therefore, is there a benefit to the colony to producing variably sized workers? In chapter three, I find that colonies with greater size variation do not produce more brood under either constant or variable access to food compared to similarly sized colonies with less worker size variation. These results suggest that the commonly assumed hypothesis that variation increases system efficiency (i.e. colonies to produce more individuals) and system robustness (i.e. colonies to survive environmental perturbations) may not explain body size variation within bumble bees, or at least that they do not do so under lab conditions. In chapter four, I combine economic theory and empirically-measured phenotypic-specific costs to propose a novel hypothesis, that diversity may have evolved as a way to increase group efficiency by minimizing opportunity costs to the group through the production of phenotypes that have a comparative advantage at different tasks. The model that I built and parametrized from the bumble bee literature suggests that colony efficiency increases with size variation. The model results differ from the empirical results, suggesting that the benefits of comparative advantage may only be apparent in colonies that forage in a more demanding natural environment. This body of work thereby suggests that some of the common assumptions about the function of component variation, e.g. that each component type is uniquely suited to one task, do not always explain and why it exists. I propose here a new hypothesis for why variation may evolve: components may vary in cost-benefit tradeoff differentially across tasks. This novel hypothesis argues for the importance of considering the production costs of the different components within the system relative to their performances. This hypothesis may also reconcile the mixed results from previous studies on the relationship between component variation and system performance.