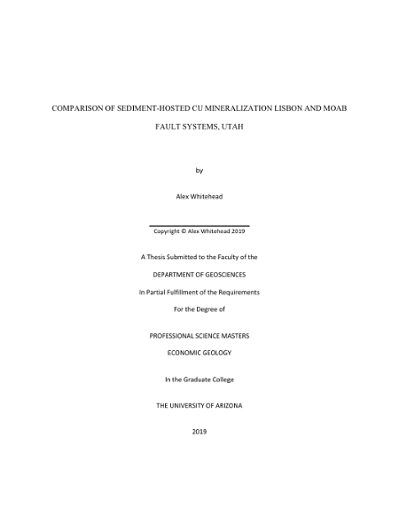 Copper deposits on the Colorado Plateau are well exposed variants on the theme of sediment-hosted copper systems. Study of two contrasting areas in the Colorado Plateau, Lisbon Valley and the northern Moab fault, allows evaluation of controls on mineralization and their possible relationships to broader basinal processes, through a combination of published work with new mapping, core logging, petrography, short-wave infrared spectroscopy (SWIR), and geochemical analyses. The focus of this study was on the GTO pit in the Lisbon Valley Mine and surface exposures along the northern Moab Fault. Both areas occur in the vicinity of step-over zones along major NW-trending normal faults. Both also areas also exhibit local bleaching of red beds and rare bitumen, suggesting flow of reduced fluids (hydrocarbons?). However, in detail, both areas differ in host, recognized alteration, and styles of mineralization. At Lisbon Valley, economic copper mineralization, composed principally of chalcocite and its weathering products, is mainly restricted to pyrite-depleted, carbonate-cement-poor strata in the variably pyritic sandstones and conglomerates of the Early Cretaceous Burro Canyon formation. In this area, bleaching is found throughout the stratigraphic column from the Permian to the Jurassic and are associated with formation of secondary kaolinite and other acid-stable sheet silicates. Rare hematite preserved under quartz overgrowths suggests that some of the Burro Canyon may have been red prior to (hydrocarbon-related?) bleaching. Mineralization typically occurs within 100 meters of major strands of the Lisbon Valley fault system. By contrast, along the northern Moab Fault the bleached upper part of the Moab Member of the Entrada formation contains widespread sparse copper mineralization, in the form of Cu(±Fe) sulfides and their weathering products. Fracture-controlled concentrations of Cu-Fe sulfides (now cuprian limonites) are locally abundant along structures at along the northern Moab fault. However, unlike at Lisbon Valley, the typical strata hosting Cu are Fe poor show little evidence for widespread early pyrite. The copper occurrences (now oxidized) have high Cu:Fe (>5:1) indicating a chalcocite-like, iron-poor precursor. Relatively pure calcite cement and nodules are abundant close to the fault splays whereas variably ferroan and manganoan carbonate is extensive in the lower Moab Member. Evidence of selective bleaching of original red beds near faults and in favorable (sandy) strata is well developed in both the Curtis and Slick Rock members of the Entrada Formation. Where present, copper occurs with bleaching indicating that it may have been localized by the presence of hydrocarbons or sour gas along the northern Moab fault and Lisbon Valley.. Mineralization postdates bleaching and broadly correlates with structures (second-order) if not specifically structurally controlled (first-order). Based on published work, these relationships imply that mineralization is Laramide (Late Cretaceous) or younger. Oxidized basinal brines, focused by faults and favorable stratigraphy, are inferred to have carried Cu and other metals which were then trapped by reaction with sulfide. The sulfide came from combinations of: (1) preexisting pyrite in the host rock, (2) H2S in a second fluid, and/or (3) S2- generated by thermochemical or bacterial sulfate reduction by organic carbon. At Lisbon Valley, stratigraphic control by preexisting pyrite and a reducing, perhaps sulfide-bearing fluid appear to have been the key traps in the Cretaceous rocks; along the Moab Fault, stratigraphic localization of copper at the top of the Curtis in iron-poor rocks suggests a hydrocarbon or gas (H2S-bearing?) trap. These results parallel evidence for similarly diverse controls on faults and stratigraphy elsewhere in the Paradox Basin.