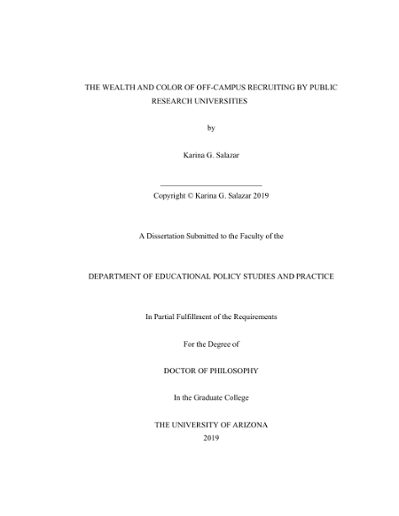 This dissertation builds a research agenda that explores how off-campus recruiting visits by public research universities may undermine access for underserved student populations. Mainstream educational explanations for racial and socioeconomic access inequality place the onus on students, families, and K-12 schools. At the same time, policy discourse on higher education access largely ignores how the enrollment management behaviors of universities also impacts access. An alternative explanation for socioeconomic and racial access inequality is that university enrollment priorities are biased against low-income students and Students of Color. Universities spend considerable resources identifying prospective students and traveling across the country to solicit admission applications from these students (Hossler & Bontrager, 2014; Stevens, 2007). Knowing which student populations are targeted by university recruiting efforts can yield credible indicators of university enrollment priorities. The two empirical studies in this dissertation analyze off-campus recruiting visits by public research universities. Recruiting visits were collected from “web-scraping” travel schedules from admissions websites and from issuing public records requests. These recruiting data are then merged to secondary data on the characteristics of high schools and communities. The first empirical study in Chapter 3 analyzes similarities and differences in off-campus recruiting patterns across six public research universities using simple descriptive statistics, linear probability models, and geospatial visualizations. The study draws on resource dependence theory (Pfeffer & Salancik, 1978) and academic capitalism (Slaughter & Leslie, 1997; Slaughter & Rhoades, 2004) to develop expectations about university recruiting behavior and whether patterns are linked to unfavorable state funding environments. Findings for Chapter 3 suggest that most universities in the study make many more out- of-state recruiting visits than in-state recruiting visits. Out-of-state visits tend to be concentrated within suburban, affluent, and predominantly white public high schools and private schools. Findings suggests that income and racial biases in recruiting visits persist even after controlling for other factors. Income bias is also evident within in-state recruiting visits, although to a lesser magnitude than out-of-state visits. While some in-state visits exhibited patterns of racial bias, this finding is not consistent across all universities in the study. Coinciding with academic capitalism (Slaughter & Rhoades, 2004), patterns of income and racial biases in recruiting visits across nearly all universities, including those with more favorable state funding environments, suggest that these patterns are only partly a function of universities’ unfavorable environmental conditions and resources. Grounded in the historical governing of space and its impact on where People of Color live (Hardy, Logan, & Parman, 2018; Rothstein, 2018), Chapter 4 investigates the racial bias found in out-of-state recruiting visits in-depth through a geographical lens. This second empirical study examines the spatial distributions of recruiting visits by four universities across sub- metropolitan areas of different racial and income compositions in the Los Angeles and Dallas metropolitan areas. Focusing on the spatial and intersecting relationships between race, income, and academic achievement, the guiding research question for this second empirical study is “are Communities of Color and white communities with comparable income and achievement characteristics equally as likely to receive recruiting visits?” Chapter 4 draws on critical geography’s concept of place (Agnew, 2011) and critical race theory’s whiteness as property (Harris, 1993) to contextualize average probabilities for the likelihood of high schools receiving a visit calculated in Chapter 3. Rather than treating schools as abstract spaces that are uprooted and removed from the racial and political places in which they are located, the study contextualizes recruiting visits within metropolitan areas and within real communities to explore whether recruiting efforts spatially discriminate against Communities of Color. Using spatial descriptive statistics and geospatial visualizations, the study finds racial and geographic disparities in the location of recruiting visits within the Los Angeles and Dallas metropolitan areas. Findings suggest that white communities are more likely to receive a recruiting visit than Communities of Color, despite having comparable income and educational achievement characteristics. Racial biases also intensify when analyzing which schools receive more than one recruiting visit and which schools are visited by multiple universities. Together, findings for Chapter 4 reveal that universities spatially redline Black and Latinx communities across all income levels located within the center of the Los Angeles and Dallas MSAs. Chapter 5 discusses the contributions of these studies to broader literatures, draws implications for policy and practice, and proposes a future research agenda.