Multisensory Processing in the Primate Amygdala 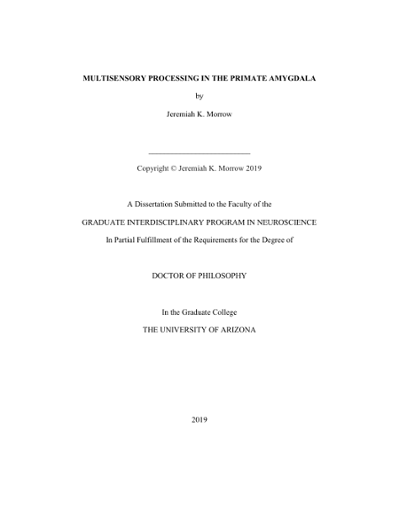 The ability to make use of the diverse sensory information present in the natural world is critical for every living creature from single-cell organisms to humans. In the primate brain, signals from different sensory modalities begin to intermix as early as the primary sensory cortices and become intricately interwoven along a myriad of parallel processing routes. Many of these routes pass through a temporal lobe structure called the amygdala. This subcortical cluster of nuclei is involved in a host of functions ranging from regulation of the autonomic nervous system to the generation of social behaviors. Despite the diverse inputs and varied functions of the amygdala, most of what is known about this structure in primates comes from studies that relied on visual stimuli. More must be done to assess how the primate amygdala processes multisensory information in order to better understand how this structure contributes to higher order cognitive functions. The three chapters of this dissertation report the outcome of experiments that are a logical progression of my research. The first experiment presented here examined how the amygdala processes visual information as monkeys scanned complex arrays of images. While some theories suggested that neural activity in the amygdala should alert an organism to potentially important stimuli before the animal attends to them, we found that the activity of neurons in the amygdala was gated by attention. Some neurons were found to be tuned to specific categories of stimuli (e.g., monkey faces or flowers); however, many cells responded to some degree across a range of categories. The complexity of the responses seen in this study have become increasingly common observations in neuroscience experiments. In order to link the work in the visual domain with ongoing work in the laboratory that focused on touch, we designed an experiment that involved both visual and tactile stimuli. We also added auditory stimuli in order to cover a wider subset of sensory domains. In these experiments, we examined the responses of neurons in the amygdala to stimuli that were devoid of any obvious emotional or social meaning to the monkeys (neurons in the amygdala are known to respond to these abstract features). As expected, we found neurons that responded to stimuli of all three sensory domains; however, we were surprised by the large proportion of responsive cells (~70%) given the low salience of the stimuli. Furthermore, we found that many neurons appeared to differentiate the sensory modality of the stimulus by varying different parameters of their spiking activity. The high number of multisensory responses from neurons in the amygdala suggests that researchers may be missing many crucial functions of this structure when the stimulus space is small or focuses on stimuli from a single sensory domain. The second chapter of the dissertation reports the outcome of this experiment. In the third chapter, I report the outcome of applying a data analysis method, new to the study of local field potentials (LFPs), to data recorded in response to multisensory stimuli. It has been notoriously difficult to extract meaningful information from LFPs in the primate amygdala, primarily because the amygdala lacks the layered anatomical organization of the neocortex or the hippocampus. A small number of reports suggest a functional relevance of theta and gamma oscillations in rodents and cats during anticipatory anxiety, fear, and reward learning tasks but attempts to quantify or interpret amygdala LFP in primates are almost non-existent. By simultaneously recording field potentials from the entire dorsal-ventral axis of the amygdala, we were able to isolate statistically distinct signals likely related to the underlying neural structure of the amygdala. We used a non-orthogonal covariance-based decomposition method, called generalized eigendecomposition (GED), that maximizes the differences between experimental conditions (e.g., baseline and stimulus delivery) to extract statistically dissociable components of LFP activity related to sensory processing. The activity captured by these components reflects electrophysiological structure likely generated by networks of neurons in the amygdala. The activity of these component signals often differentially processed the three sensory modalities tested. Importantly, the signals extracted with these methods frequently showed dramatic changes at the anatomical boundaries between the nuclei in the amygdala, suggesting that these networks are spatially defined by these boundaries. These experiments demonstrate that meaningful LFP signals can be readily extracted from the amygdala with sophisticated analysis techniques. Taken together, the work contained in this dissertation deepens our understanding of the ways in which the primate amygdala may contribute to higher order cognitive functions. For example, in order to understand how the amygdala contributes to social communication we must know how attending to social stimuli modulates activity of amygdala neurons (chapter 1). Furthermore, we need to have an idea of how information from multiple sensory modalities is processed (chapters 2 and 3) as sight, sound, and touch can all provide valuable information about the emotional state and intentions of others. These functions are severely impaired by amygdala damage, therefore, the neural processes reported here might be the substrate, or neural foundation, of these behaviors.