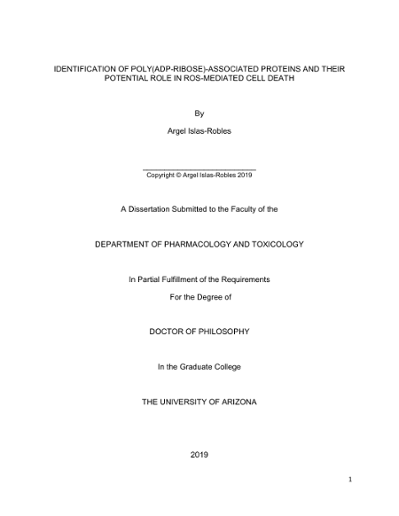 2,3,5-Tris-(glutathion-S-yl)hydroquinone (TGHQ) is a nephrotoxic and nephrocarcinogenic metabolite of hydroquinone. TGHQ can redox cycle, generating reactive oxygen species (ROS) which cause DNA strand breaks, hyperactivation of poly(ADP-ribose) polymerase-1 (PARP-1), increases in intracellular calcium concentration ([Ca2+]i), ultimately resulting in cell death. PARP-1 is a nuclear protein involved in multiple cellular processes such as DNA repair, transcriptional regulation, and cellular differentiation. PARP-1 catalyzes the attachment of a post-translational modification, consisting of multi branched ADP-ribose polymers (PAR) on target proteins. In human renal proximal tubule cells (HK-2) ROS stress promotes PARP-1 hyperactivation and elevations in [Ca2+]i which are reciprocally coupled. The molecular mechanism of this interaction is unclear. The aim of the present study was to identify TGHQ-induced PAR-associated proteins and their potential role in cell death. HK-2 cell were treated with 400 μM TGHQ to induce ROS stress leading to PARP-1 hyperactivation. PAR-associated proteins were immunoprecipitated, followed by separation by SDS PAGE and proteomic analysis. A relative protein abundance analysis by spectral counts allowed us to obtain fold-changes in protein abundance relative to control. 356 PAR-associated proteins were significantly identified as modified by TGHQ treatment. From this cohort, 281 proteins showed an increased PAR association while 90 were decreased, and 169 appear to be novel interactors of PAR. Additionally, 13 targets had Gene Ontology annotations related to calcium. Of these, neuroblast differentiation-associated protein (AHNAK), calcium homeostasis endoplasmic reticulum protein (CHERP) and general transcription factor II-I (TFII-I) are directly involved in modulation of [Ca2+]i. TFII-I regulates [Ca2+]i by competing for phospholipase C (PLC) binding with the calcium channel TRPC3. Free PLC binds and promotes the translocation of TRPC3 to the plasma membrane leading to increases in [Ca2+]i. TGHQ induced TFII-I translocation from the nucleus to the cytosol, decreased tyrosine TFII-I phosphorylation, reduced PLC-TFII-I interaction, and increased PLC and TRPC3 translocation. However, pharmacological inhibition or depletion of TRPC3 or PLC did not have a protective effect in TGHQ-mediated decrease in cell viability, indicating that these proteins are not major players in TGHQ toxicity. Gene expression analysis reveals that the transcription of TFII-I-dependent genes is induced by TGHQ treatment, suggesting that PARylation of TFII-I regulates its transcriptional activity. Depletion of the TGHQ-induced differential PAR-associated proteins, PKM2, C23, IQGAP1, and UBF1 which participate in important cellular processes such as cell cycle regulation, ribosomal synthesis, spindle assembly, growth, cell survival, and rRNA transcription, did not ameliorate TGHQ cytotoxicity. Through our studies, we recognized that TGHQ have a prominent impact in the PAR interactome by promoting the differential PAR association of multiple proteins. We speculate that TGHQ-induced PARP-1 hyperactivation promotes a deep alteration in the PAR network, leading to multiple cellular events which in combination result in cell death. The studies performed in this thesis not only reveal novel interactions and pathways that are regulated by PAR, but also show the specific proteins that might participate in mechanisms in which PARP-1 activation result in cell injury.