An Interorganizational Network Analysis of the Social Movement Sector in New York, 1960-1995 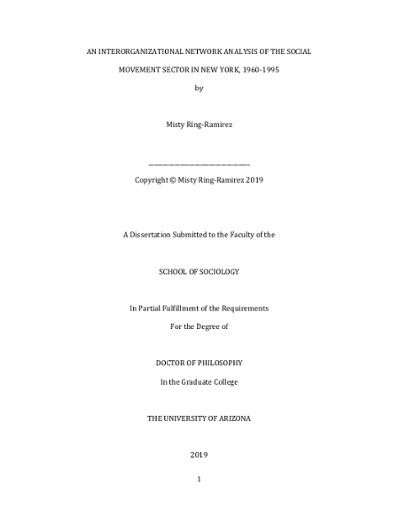 Researchers in many fields have embraced social network analysis as a way to predict a range of outcomes, from the spread of infectious diseases within populations, to the likelihood that individuals will engage in high-risk activism, to the probability that countries will ratify treaties. Across these diverse contexts, there is robust empirical evidence that social networks impact nearly all the opportunities, constraints, and decision-making processes that individuals, organizations, and even nations experience. In spite of these compelling findings, researchers have primarily focused on micro-relational processes and have not paid adequate attention to whether, and how, macro-structural network characteristics impact the behaviors of the actors within it. I address this question by exploring the impact of whole network measures on a social process that is of special interest to both social movement and organizational behavior scholars: the spread of organizational behaviors. The first step in understanding if and how macro-level network characteristics impact social processes is describing how network structures vary. To this end, I begin by describing the evolution of the social network of social movement organizations that were active in New York between 1960 and 1995, where ties between organizations are formed when they attend the same protest event. To do this, I build network graphs based on co-participation for each year between 1960 and 1995, and also calculate several formal whole network measures at each of these intervals. I find that the social network of social movement organizations was remarkably different in different time periods. In the 1960s and early 1970s, which corresponds to the height of the much-studied protest cycle in the U.S., the network was much more connected and centralized than at later time periods. Near the end of the period, the network was heavily fragmented but still featured small, densely connected clusters, primarily composed of social movement organizations from within the same social movement industry. Having established that there is variation in the network over time, the second stage of this project was to predict the likelihood that a social movement organization will attend a protest event that uses each of 19 protest tactics that it has never previously used before. I make these predictions using peer influence models, a variation on discrete time event history analysis. I include, as predictors, micro-relational network characteristics and measures of peer influence, node-level control variables, macro-structural network measures and contextual control variables, and an interaction term between the peer influence and macro-structural network measures. I find that micro-relational, peer influence, and node-level control covariates influence tactical adoption as expected, but macro-structural network measures also significantly impact the probability that an organization will adopt a new tactic, net of other contextual controls. Future researchers should consider and measure the impact of whole network characteristics on the social processes they investigate.