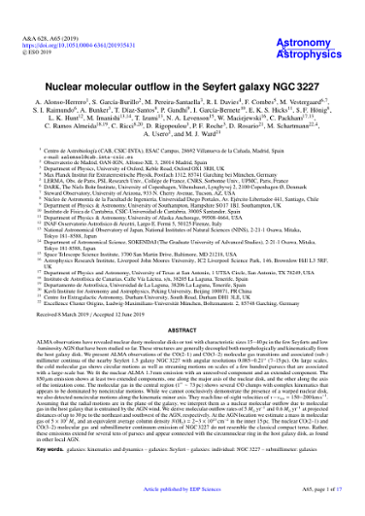 ALMA observations have revealed nuclear dusty molecular disks or tori with characteristic sizes 15-40 pc in the few Seyferts and low-luminosity AGN that have been studied so far. These structures are generally decoupled both morphologically and kinematically from the host galaxy disk. We present ALMA observations of the CO(2-1) and CO(3-2) molecular gas transitions and associated (sub-) millimeter continua of the nearby Seyfert 1.5 galaxy NGC3227 with angular resolutions 0.085-0.21 '' (7-15 pc). On large scales, the cold molecular gas shows circular motions as well as streaming motions on scales of a few hundred parsecs that are associated with a large-scale bar. We fit the nuclear ALMA 1.3mm emission with an unresolved component and an extended component. The 850 mu m emission shows at least two extended components, one along the major axis of the nuclear disk, and the other along the axis of the ionization cone. The molecular gas in the central region (1 '' similar to 73 pc) shows several CO clumps with complex kinematics that appears to be dominated by noncircular motions. While we cannot conclusively demonstrate the presence of a warped nuclear disk, we also detected noncircular motions along the kinematic minor axis. They reach line-of-sight velocities of v-v(sys) = 150-200 km s(-1). Assuming that the radial motions are in the plane of the galaxy, we interpret them as a nuclear molecular outflow due to molecular gas in the host galaxy that is entrained by the AGN wind. We derive molecular outflow rates of 5 M-circle dot yr(-1) and 0.6 M-circle dot yr(-1) at projected distances of up to 30 pc to the northeast and southwest of the AGN, respectively. At the AGN location we estimate a mass in molecular gas of 5 x 10(5) M-circle dot and an equivalent average column density N(H-2) = 2-3 x 10(23) cm(-2) in the inner 15 pc. The nuclear CO(2-1) and CO(3-2) molecular gas and submillimeter continuum emission of NGC3227 do not resemble the classical compact torus. Rather, these emissions extend for several tens of parsecs and appear connected with the circumnuclear ring in the host galaxy disk, as found in other local AGN.