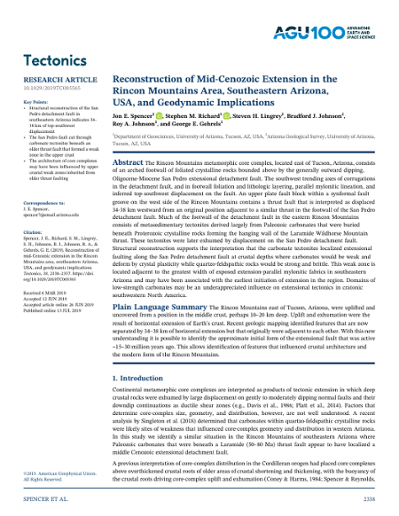 The Rincon Mountains metamorphic core complex, located east of Tucson, Arizona, consists of an arched footwall of foliated crystalline rocks bounded above by the generally outward dipping, Oligocene-Miocene San Pedro extensional detachment fault. The southwest trending axes of corrugations in the detachment fault, and in footwall foliation and lithologic layering, parallel mylonitic lineation, and inferred top-southwest displacement on the fault. An upper plate fault block within a synformal fault groove on the west side of the Rincon Mountains contains a thrust fault that is interpreted as displaced 34-38 km westward from an original position adjacent to a similar thrust in the footwall of the San Pedro detachment fault. Much of the footwall of the detachment fault in the eastern Rincon Mountains consists of metasedimentary tectonites derived largely from Paleozoic carbonates that were buried beneath Proterozoic crystalline rocks forming the hanging wall of the Laramide Wildhorse Mountain thrust. These tectonites were later exhumed by displacement on the San Pedro detachment fault. Structural reconstruction supports the interpretation that the carbonate tectonites localized extensional faulting along the San Pedro detachment fault at crustal depths where carbonates would be weak and deform by crystal plasticity while quartzo-feldspathic rocks would be strong and brittle. This weak zone is located adjacent to the greatest width of exposed extension-parallel mylonitic fabrics in southeastern Arizona and may have been associated with the earliest initiation of extension in the region. Domains of low-strength carbonates may be an underappreciated influence on extensional tectonics in cratonic southwestern North America. Plain Language Summary The Rincon Mountains east of Tucson, Arizona, were uplifted and uncovered from a position in the middle crust, perhaps 10-20 km deep. Uplift and exhumation were the result of horizontal extension of Earth's crust. Recent geologic mapping identified features that are now separated by 34-38 km of horizontal extension but that originally were adjacent to each other. With this new understanding it is possible to identify the approximate initial form of the extensional fault that was active 15-30 million years ago. This allows identification of features that influenced crustal architecture and the modern form of the Rincon Mountains.