Measurements of I-129 in the Pacific Ocean at Scripps Pier and Pacific Northwest sites: A search for effects from the 2011 Fukushima Daiichi Nuclear Power Plant accident and Hanford 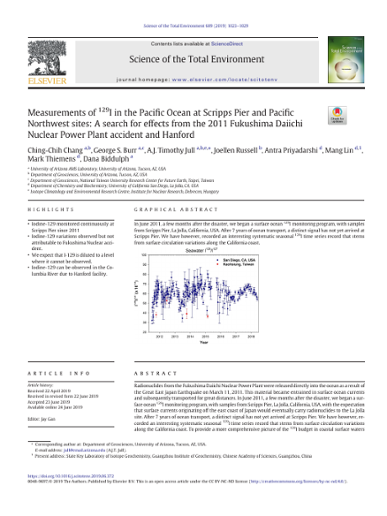 SCIENCE OF THE TOTAL ENVIRONMENT

© 2019 The Authors. Published by Elsevier B.V. This is an open access article under the CC BY-NC-ND license (http://creativecommons.org/licenses/by-nc-nd/4.0/).

Radionuclides from the Fukushima Daiichi Nuclear Power Plant were released directly into the ocean as a result of the Great East Japan Earthquake on March 11, 2011. This material became entrained in surface ocean currents and subsequently transported for great distances. In June 2011, a few months after the disaster, we began a surface ocean 129I monitoring program, with samples from Scripps Pier, La Jolla, California, USA, with the expectation that surface currents originating off the east coast of Japan would eventually carry radionuclides to the La Jolla site. After 7 years of ocean transport, a distinct signal has not yet arrived at Scripps Pier. We have however, recorded an interesting systematic seasonal 129I time series record that stems from surface circulation variations along the California coast. To provide a more comprehensive picture of the 129I budget in coastal surface waters off the west coast of the U.S., we also include 129I data from the Columbia River, and offshore sites along the coast of Washington State. Anthropogenic nuclides are carried by the Columbia River into the Pacific Ocean from the vicinity of the decommissioned Hanford nuclear facility. We find highly elevated 129I/127I values in the Columbia River, downstream from the Hanford site, but this anthropogenic 129I becomes significantly diluted once it reaches the Pacific Ocean. Nonetheless, its imprint persists in surface seawater off the west coast of the U.S. that has significantly higher 129I/127I levels than other surface sites in the Pacific Ocean.

Except where otherwise noted, this item's license is described as © 2019 The Authors. Published by Elsevier B.V. This is an open access article under the CC BY-NC-ND license (http://creativecommons.org/licenses/by-nc-nd/4.0/).