Long‐Term Hydroclimatic Patterns in the Truckee‐Carson Basin of the Eastern Sierra Nevada, USA 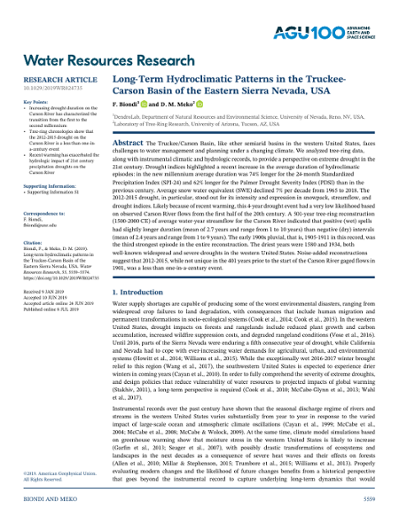 The Truckee/Carson Basin, like other semiarid basins in the western United States, faces challenges to water management and planning under a changing climate. We analyzed tree-ring data, along with instrumental climatic and hydrologic records, to provide a perspective on extreme drought in the 21st century. Drought indices highlighted a recent increase in the average duration of hydroclimatic episodes: in the new millennium average duration was 74% longer for the 24-month Standardized Precipitation Index (SPI-24) and 62% longer for the Palmer Drought Severity Index (PDSI) than in the previous century. Average snow water equivalent (SWE) declined 7% per decade from 1965 to 2018. The 2012-2015 drought, in particular, stood out for its intensity and expression in snowpack, streamflow, and drought indices. Likely because of recent warming, this 4-year drought event had a very low likelihood based on observed Carson River flows from the first half of the 20th century. A 501-year tree-ring reconstruction (1500-2000 CE) of average water-year streamflow for the Carson River indicated that positive (wet) spells had slightly longer duration (mean of 2.7 years and range from 1 to 10 years) than negative (dry) intervals (mean of 2.4 years and range from 1 to 9 years). The early 1900s pluvial, that is, 1905-1911 in this record, was the third strongest episode in the entire reconstruction. The driest years were 1580 and 1934, both well-known widespread and severe droughts in the western United States. Noise-added reconstructions suggest that 2012-2015, while not unique in the 401 years prior to the start of the Carson River gaged flows in 1901, was a less than one-in-a-century event.