Breastfeeding Knowledge and Behavior Among Women Visiting a Tertiary Care Center in India: A Cross-Sectional Survey 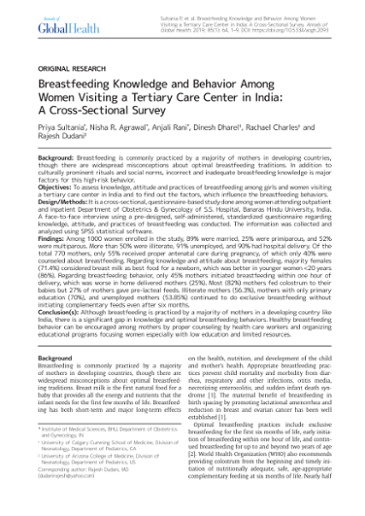 Copyright © 2019 The Author(s). This is an open-access article distributed under the terms of the Creative Commons Attribution 4.0 International License (CC-BY 4.0).

Background: Breastfeeding is commonly practiced by a majority of mothers in developing countries, though there are widespread misconceptions about optimal breastfeeding traditions. In addition to culturally prominent rituals and social norms, incorrect and inadequate breastfeeding knowledge is major factors for this high-risk behavior. Objectives: To assess knowledge, attitude and practices of breastfeeding among girls and women visiting a tertiary care center in India and to find out the factors, which influence the breastfeeding behaviors. Design/Methods: It is a cross-sectional, questionnaire-based study done among women attending outpatient and inpatient Department of Obstetrics & Gynecology of S.S. Hospital, Banaras Hindu University, India. A face-to-face interview using a pre-designed, self-administered, standardized questionnaire regarding knowledge, attitude, and practices of breastfeeding was conducted. The information was collected and analyzed using SPSS statistical software. Findings: Among 1000 women enrolled in the study, 89% were married, 25% were primiparous, and 52% were multiparous. More than 50% were illiterate, 91% unemployed, and 90% had hospital delivery. Of the total 770 mothers, only 55% received proper antenatal care during pregnancy, of which only 40% were counseled about breastfeeding. Regarding knowledge and attitude about breastfeeding, majority females (71.4%) considered breast milk as best food for a newborn, which was better in younger women <20 years (86%). Regarding breastfeeding behavior, only 45% mothers initiated breastfeeding within one hour of delivery, which was worse in home delivered mothers (25%). Most (82%) mothers fed colostrum to their babies but 27% of mothers gave pre-lacteal feeds. Illiterate mothers (56.3%), mothers with only primary education (70%), and unemployed mothers (53.85%) continued to do exclusive breastfeeding without initiating complementary feeds even after six months. Conclusion(s): Although breastfeeding is practiced by a majority of mothers in a developing country like India, there is a significant gap in knowledge and optimal breastfeeding behaviors. Healthy breastfeeding behavior can be encouraged among mothers by proper counseling by health care workers and organizing educational programs focusing women especially with low education and limited resources.

Except where otherwise noted, this item's license is described as Copyright © 2019 The Author(s). This is an open-access article distributed under the terms of the Creative Commons Attribution 4.0 International License (CC-BY 4.0).