Exotic Carbon Chemistry in a Planetary Nebula: The Unusual Case of K4-47 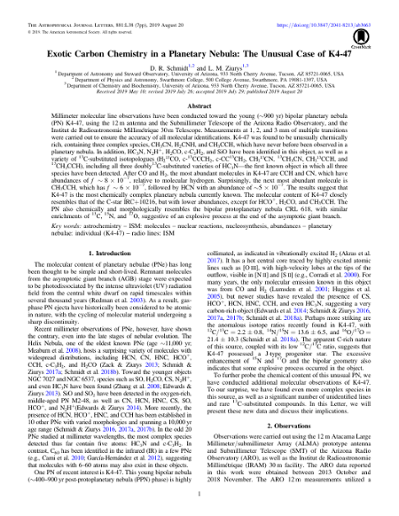 Millimeter molecular line observations have been conducted toward the young (similar to 900 yr) bipolar planetary nebula (PN) K4-47, using the 12 m antenna and the Submillimeter Telescope of the Arizona Radio Observatory, and the Institut de Radioastronomie Millimetrique 30 m Telescope. Measurements at 1, 2, and 3 mm of multiple transitions were carried out to ensure the accuracy of all molecular identifications. K4-47 was found to be unusually chemically rich, containing three complex species, CH3CN, H2CNH, and CH3CCH, which have never before been observed in a planetary nebula. In addition, HC3N, N2H+, H2CO, c-C3H2, and SiO have been identified in this object, as well as a variety of C-13-substituted isotopologues ((H2CO)-C-13, c-(CCCH2)-C-13, c-(CCCH2)-C-13, (CH3CN)-C-13, (CH3CN)-C-13, (CH3CCH)-C-13, and (CH3CCH)-C-13), including all three doubly C-13-substituted varieties of HC3N-the first known object in which all three species have been detected. After CO and H-2, the most abundant molecules in K4-47 are CCH and CN, which have abundances of f similar to 8 x 10(-7), relative to molecular hydrogen. Surprisingly, the next most abundant molecule is CH 3 CCH, which has f similar to 6 x 10(-7), followed by HCN with an abundance of similar to 5 x 10(-7). The results suggest that K4-47 is the most chemically complex planetary nebula currently known. The molecular content of K4-47 closely resembles that of the C-star IRC+10216, but with lower abundances, except for HCO+, H2CO, and CH3CCH. The PN also chemically and morphologically resembles the bipolar protoplanetary nebula CRL 618, with similar enrichments of C-13, N-15, and O-17, suggestive of an explosive process at the end of the asymptotic giant branch.